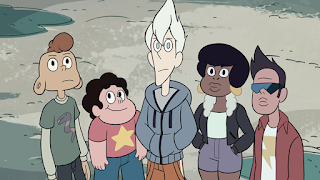 In case you were wondering, no these reviews are not the first time I've encountered this show. I've actually seen a good chunk of the original season, though as to where I stopped viewing this show as much, it started around this episode. I was just so burned out by how boring this one is, that I stopped giving this show the chance to turn around for me.

Looking at this episode again, not much as changed, I still despise it, I don't even want to bother reviewing it honestly. Normally, when I review episodes of this show, I review them within minutes after watching the episode, this episode on the other hand? I've spent half a day getting distracted from even bothering.

Anyway, so the main thing that pushes me away from this episode, is that it's your typical "teen wants to hang with the cool teens" episode. Simply put, it's hard to make this a compelling plot, we all know the lesson, be yourself, don't follow others, etc. I'll give it credit for at least making the teens decent, rather than going to the typical "cool teens are jerks" scenario.

I'm sure Lars is a better character as the show goes along (Steven tags along, but is not the main focus this time), but this episode just does him no favors. He's whiny, we know his eventual lesson, Lars just isn't compelling.

I'm not going into greater detail, if you've seen an episode like this, you know where it's heading. It's not funny, or emotionally resonant, it's just there. Skip it.