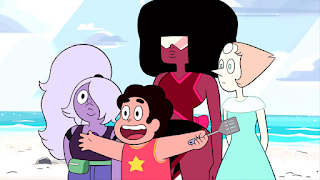 Wait, we're already at the beach episode? Okay then.

Well this was a pleasant surprise. It's pretty obvious that Steven Universe takes influence from anime right? Well if you didn't know it, you'll definitely know it by this episode. The "beach episode" is an infamous staple in anime, they're usually filler for the show to allow the comics to advance a little further. I've always found the concept of "beach episodes" hilarious, for one, it's absurd that they even exist, I mean do the heroes really have the time to go to the beach at the exact same time? Of course that's assuming they all want to go to the beach. The other thing that makes me laugh about beach episodes is simply this, do they even fulfill their purpose? They're often just one episode, sure that gives extra time for the manga to move along, but it can't be much, why not create a series of filler episodes (GARLIC JR. SAGA) for a longer break? The idea just seems flawed all around.

Back to this show though, the beach plot is as silly as you'd expect. The episode opens with a brief fight against a pufferfish monster, it's already kinda goofy. The fight is cut short when Amethyst knocks it away, resulting in the Gems regrouping for a later fight, however, Garnet had been knocked into a local pizzeria, resulting in the owner banning the Gems. Steven is bothered by the ban, but the Gems are indifferent about it, which both makes sense and is pretty funny.

Unhappy about the situation, Steven decides to make amends by inviting the pizza family for a beach party (you can't see me, but I'm slowly widening my eyes as a smile cracks open ready to laugh). The Gems humor Steven, while the family come along, even the father, who is still angered about the Gems. The Gems change into their beach outfits, a cute little joke, though I urge you, the reader, avoid looking fanart of this, knowing the internet, I have a feeling you should. From there, we get the funny, but awkward conversations, the volleyball game that gets hectic, and any other funny bits you'd likely expect.

Of course, by this point you've probably forgotten the pufferfish, don't worry, they did as well. Once it comes back to wreak havoc, the Gems and the family have to come together to save the day, it's a funny, cool little bit as we see Steven and the pizza Grandma plan things out. Thus, our episode ends with the Gems no longer banned, though aside from Steven, they don't really care either way, which is still funny.

I loved this episode, it was just one hilarious homage (jab?) to a common anime episode. Definitely check this one out.