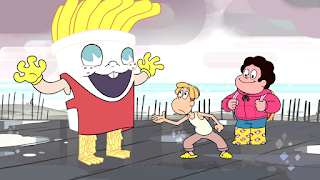 Frybo is the thing of nightmares.
Okay, so Frybo isn't that scary, but he's definitely the creepiest thing the show has done thus far. This episode is an improvement over the last episode, in that Steven's mistake this time feels a lot more natural to an innocent child. Steven's lack of interest in Pearl's warnings are comical, without being too annoying on the character, his a kid, it's understandable to lose interest in something while he has a dilemma. The creation of Frybo was a mistake, but it works here because it was intentionally a creation to help a friend out.

I just wish the episode wouldn't feel as rushed. While I appreciate the ten minute running time, it's very apparent that this episode would benefit from a few extra minutes, making Frybo a little creepier, while also making Steven's friend a bit more fleshed out in his troubles. As is, I just felt the episode was a fun, but incomplete tale of a monster come to life.

I recommend this episode, but only barely for a glimpse at a creepy fry monster.