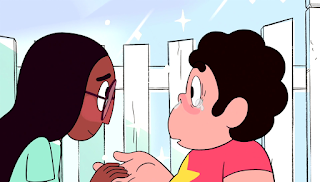 This is a pretty interesting episode, in that it's another episode of Steven learning a new power, but this one feels like a step forward for the story. There's a sense that the story is finally picking up, as Steven finally acknowledges the weight of his mother's powers/legacy, granted as he points out, since he never met her, he can barely muster the sadness of crying for her. This isn't an incredibly emotional episode, but it's definitely giving some deep thoughts to consider over the loss of those we've never met.

At the start of the episode, we assume this will be a Connie and Steven centered episode, only for Connie to question a new fence around the place. Hesitant at first, Steven begins to tell a tale of Amethyst falling off the cliff. Connie assumes there's more to this, which Steven only tells after beginning to wear Connie's glasses, which she only allows when he gives her his juice (funny, but this turns out to be a nice plant for a later event).

Our main focus of the episode, continues from Amethyst's fall, see it turns out she's cracked her gem, which is messing with her existence. Garnet and Pearl reveal it can be fixed, but Steven needs to cry, as that was how Rose could heal others, obviously, being a boy, Steven denies being able to cry (Ha!). The next choice is to go into Rose's fountain, which they soon learn is infested with vines. After Amethyst starts getting worse (along with Pearl, amusingly, freaking out in crazier extremes) Steven is forced to stay with her near the fountain as Pearl and Garnet seek a way to fix the issue. Steven forces himself to cry, with no success, even as he sadly laments that he didn't know his mother he can't cry. Of course he eventually cries, but his tears hold no healing power, though luckily the fountain works once more. Steven takes the whole event as a sad one, believing he has no powers (odd as he has had powers before, but oh well), Connie makes him feel better by making him realize that's okay. TWIST! It turns out Connie no longer needs glasses, as Steven doesn't have healing tears, he has healing spit... in the juice she drank from, so that's why it's called an Indirect Kiss.

This was a pretty solid episode, though I really felt confused by Steven's sadness over a lack of powers, he's used them before, why would he believe he doesn't have any? That aside, this is definitely among the better episodes so far.