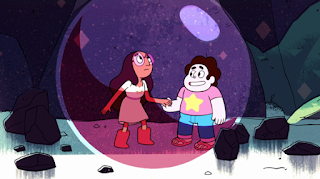 Despite the title of the episode, this does not feature Bubble Buddy from Spongebob.

This episode is just utterly charming. Admittedly, I think the last action beat is unnecessary, but overall, seeing Steven trying to make a new friend works, because it focuses on what the show does best, characters.

The majority of the episode is just a simple tale of friendship (or blossoming love?) in which Steven tries to learn more about new girl, Connie. We quickly learn that Steven has somewhat of a crush on her, which the Gems notice as well. I like how each Gem reacts differently to this news, Amethyst teases Steven, Pearl acts like a typical mother would, while Garnet wishes they'd all let Steven do his own thing while talking to her.

Eventually, Steven goes to talk with Connie, only to find she's in danger. Steven rescues her from some falling rocks by activating a magical bubble, which ends up trapping the two for the bulk of the episode. What follows is a series of comical bits of the two trying to break free, the biggest laugh I got involved a theme park with dysfunctional rides being Steven's idea to break free. After an emotional beat from Connie, including a small twist as to why Steven was keen on meeting her, they escape in time to stop a monster. Again I would've preferred they leave that out.

I really enjoyed this episode, even if it throws something unneeded by the end, it's still a fun time to sit through.