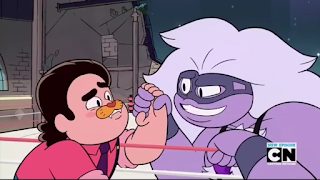 Okay if I haven't turned you away with that joke statement, here's my thoughts on this episode, it's okay. I can appreciate that this episode avoids being about monster fighting, which is as of this point, the weakest aspect of the show, but Steven's turn to being cruel is a bit underdeveloped. I like the concept of this episode, but as I mentioned with the last review, I really wish some of these ideas were expanded to a full half-hour, maybe then they'd rise above decent.

In this episode, Steven finds out Amethyst has secretly been wrestling as her alter-ego, the Purple Puma. Wanting to be a part of this, Amethyst allows Steven to wrestle, so long as he helps her win the tag team belt, thus his alter-ego, Tiger Millionaire is born. I actually really dug the alter-egos here,  as they felt creative, while also being very much the kind of thing you find in wrestling. I especially love how this all eventually builds to Pearl and Garnet fighting the two, but with them also deciding to just make some phony backstory (see, wrestling is fake), just to show acceptance of Amethyst's hobby.

Still, I wish the episode was longer, that way Steven's realization that he was being cruel was actually explored upon. As is, the episode is okay, but I'd love to see more Purple Puma and Tiger Millionaire.