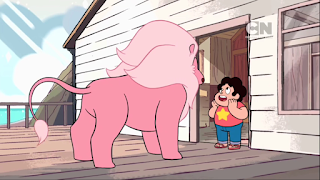 Screw your pet dog, Steven's got a lion!

Lion is undeniably the most adorable character we've seen yet on this show, before you say I'm wrong, just know I'm not. That he becomes Steven's pet, is utterly charming, much like the bulk of the episode.

The downside unfortunately, is that once again, the plot contrives a reason for some unneeded action. Granted, maybe if the show was longer the action could've been properly built up, though that's just me repeating issues I've had before again. The last minute action beat this time, comes in the form of a magical pillow that manipulates sand into becoming a dangerous fortress, no seriously.

I wish this show wouldn't always try to force these beats in, because they often drag down otherwise charming tales. Yes, yes, I hear you fan in the back, I'm only at the start of this show, but my issues remain here, once I get to later episodes, I may change my tune.

The main thing that annoyed me, is Steven, once again causing the problem, though in this scenario it just felt like he had completely forgotten an early plot point. A better take, would've made Steven accidentally cause the problem, not just throw the pillow into the sand no explanation as to why he didn't realize what he was doing. That's just frustrating.

Still, Lion is cute, and is the main reason I remembered this episode. So the stuff with Steven trying to befriend him? Cute, enjoyed it a lot, and is enough to make me recommend the episode.