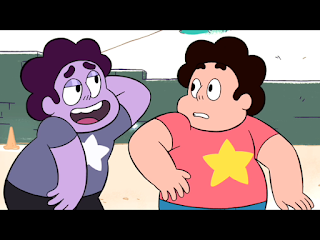 Okay, I really liked this one.
Is this another mellow episode? Yes, yes it is. That being said, who doesn't love a good body horror story?

Up to this point, we haven't really dealt with what exactly Steven can do, sure the first episode introduced that he can make a shield, but as a Gem he clearly can do more, after all the Gems have been shown to do quite a bit. Well, this episode introduces shape shifting into Steven's power set. Amethyst shows it off (complete with an amusing reference to Regular Show), leading to Steven wanting to turn into something himself. Pearl warns that trying on something like that may lead to some repercussions, but Steven shrugs it off as he turns his finger into a cat, it's kinda cute, but also kinda creepy if you think about it, which Steven doesn't.

From here we see some amusing bits of people freaking out about Steven's finger (eventually fingers), with his father, Greg, once again feeling so refreshing from the TV standard of dimwitted fathers. Of course, as things progress, Steven comes to regret his decision, resulting in the cats taking control of more spots in his body. As soon as Steven regrets this though, the Gems are needed elsewhere, leaving Steven to freak out alone. Once Steven manages to get to his father, we find him in complete fear of his lack of body control, it's incredibly eerie, and reminiscent of Akira. Things turn out well of course,but not before witnessing the show's most intense moment thus far, trust me, the cat body stuff is the thing of nightmares.

Definitely a great episode, if you haven't seen the show yet, I recommend you see this one.