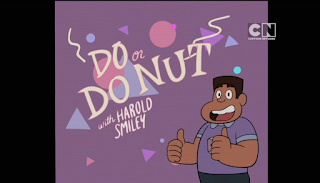 "It's like a DVD but as a rectangle."
Another hilarious episode in the show, awesome! I actually do mean that by the way, this is one hilarious episode, with the biggest highlight being the cassette Sadie makes Steven watch. Despite that, the episode actually manages to find some heart along the way, with Sadie's obvious affection for Lars being relatable to so many.

This is another "slice of life" episode, dealing with Steven covering Lars at the donut shop, after a bad back pain. Steven enjoys his time at the shop (especially the training, video which features Mr.Smiley rapping) so much, that he decides he wants to stay, but Sadie denies it because she likes Lars and won't replace him. Eventually Sadie learns that Lars faked his back pain to hang out with his friends, including another girl, resulting in her getting angry, as well as depressed on the whole thing.

The next day sees Steven joyfully bring a hot gem spice to Sadie, just to prank Lars. Sadie, at first is reluctant, but when Lars fakes his pain again, she decides to prank him. What happens next, is a funny sequence of Lars spitting flames in pain from the donut. Eventually amends are made, and everyone is happy, even Amethyst who did nothing but takes credit anyway.

As I said before this is one hilarious episode. The training video is a highlight of the show so far, while the Sadie plot is a nice emotional touch. Highly recommended.