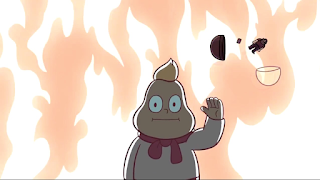 Nice Ducktales reference there, episode, you got me to smile.

This was definitely a step up from the last episode, though realistically anything is. Onion has got to be one of the weirdest characters to appear in the show to date. There's something funny, yet eerie about him, Onion never talks, as well as barely ever emotes. I don't know if the show will ever delve more into why Onion is the way he is, but he's certainly been one of the more stand out supporting characters in the show thus far, a kid who is obviously smarter than you'd think, with criminal tendencies, yet he's not a bad guy. It's that mystery behind that, that makes this an interesting episode. The jokes also help in making this at least some fun.

Steven's lost his G.U.Y.S. action figure (Guy Under Your Supervision), leading him to buy a bunch of them. Though since it's all mystery until he receives them, he ends up getting a bunch of the Guy, but not the one he wanted. Eventually, Steven finds Onion, whom he notices has the Guy figure he wants. Proposing a trade, Onion denies all of Steven's G.U.Y.S. instead, desiring a wand that Steven shows off that can copy objects.

I'll admit, Steven trading the wand, stupid move, I get it, he's a kid, but even by those standards stupid. I think they could've done something better here to get to the climax, but hey, I'll admit to loving the animation on Onion going evil.

So of course Onion wreaks mayhem. The cloning wand leads to some funny bits, including the reference to Ducktales I brought up earlier. It's eventually resolved as Steven finds out the traded Guy was actually his to begin with, which was an obvious twist.

I liked this episode fine, it's no amazing treat, but it's funny, features some nice creepy animation on Onion, while just being an enjoyable sit through.