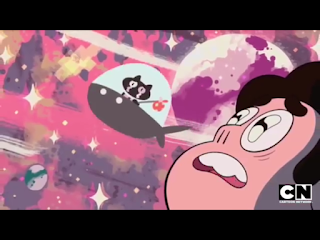 And now we began my run on Steven Universe, I hope my opinion doesn't get me killed by the fanbase.
Upfront, I will admit I am not the biggest fan of this show. I think there's some quality to it, at least based on what I've seen, I just never could get that into it. I suppose I just feel like the show's never really gotten off the way it should have, feeling like it's still in the pilot stages, rather than knowing what it wants to be. So, with that in mind, let's see if running through the entirety of Steven Universe, will change my mind.

As far as first episodes go, this is okay, nothing exciting, but it feels fresh, I remember thinking that back when I first saw this. watching it again hasn't changed my opinion, but it certainly has made me notice a few things. I admire the choice to tone the absurd humor down, it's a comedy style that Cartoon Network has overused in recent years, seeing a show actively avoid it feels nice. I also admire how little is actually explained to us, we know Steven lives with three women known as Crystal Gems, but this episode introduces little knowledge beyond that. We don't know their goals, why they have powers, or why Steven is one of them, we just know they fight creatures, it's a charming, admirable approach, and I prefer this over the characters stopping to explain what they do for ten minutes, I just wish I cared a little more.

The biggest issue for me here, is that the episode really can't decide if it wants to present a slice of Steven's life, or if it wants to show us some cool alien, insect action. The slice of life stuff works, it's a cute, charming story of Steven dealing with the loss of his favorite ice cream, while also trying to learn about his special ability, but the action is just kind of there. I can give it a small pass, after all it is the first episode, so there's plenty to learn, before the action, but that I'm not interested in seeing the action is a bit worrying. Part of the show is about this trio of women (and Steven) fighting monsters, if that doesn't hook me in, instead feeling like an intrusion to a charming, innocent tale about a boy with special abilities, than it feels like a failure on the show's part.

I can't highly recommend this for anyone, but if you're a fan of the show, or just want to give this show a try, I'd say watch it, there's some cute stuff to be found, I just wish the exciting stuff, was exciting.