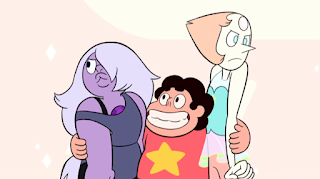 Alright, this is a really good one. Up to this point, I've often complained about the length of the episodes, and while I'll admit that's my main issue here, I do feel this episode is close to running just right. There's a clear story set up, the adventure is the focus, while the danger comes at just the right moment. Realistically my only issue is that a few extra minutes of action could've really made it land as the most epic fight so far in the show.

Anyway, the episode introduces the concept of fusion, making Steven eager to see Amethyst and Pearl fuse. Of course, if you've followed the show, as well as know your tv tropes, you know what the issue is there, they bicker a lot. Thus setting in motion a great song, Steven's "Giant Woman" which is such a catchy tune, it's one I've listened to a few times before starting these reviews.

Once the Gems reach the top, there's a lack of the prize they expected to find, a Heaven Beetle, resulting in Amethyst and Pearl arguing, Steven of course tries to bring peace.  Eventually the arguing brings a Gem monster out, resulting in Steven, along with a new goat friend (named Steven Jr. humorously) getting eaten. This event brings out Opal, the mighty fusion between Pearl and Amethyst, in a pretty cool reveal, with a pretty cool action beat.  With the monster defeated, the heroes return, with Garnet complimenting Steven, while teasing a future episode, by letting us, along with Steven, learn that he can fuse as well.

As mentioned before, a few extra minutes could've helped, but unlike other episodes so far, this episode doesn't need a whole lot. It runs almost perfectly, and is definitely an early highlight.