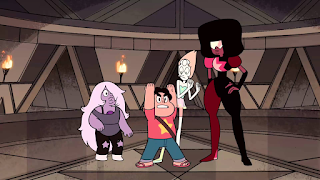 This is an odd episode to say the least, not because weird things happen, but because the "Serious Steven" gag doesn't really work when we don't see Steven actually trying to be serious. There's an attempt to be found, that is for sure, but it's barely there, so the joke and message fall flat.

Which is a shame because otherwise this is a fairly solid episode. We get a nice little adventure with Steven and Garnet (the best Gem) through some traps, seeing just how cool-headed Garnet tends to be. Pearl and Amethyst are off on their own, leaving them with little to do this time, though in fairness, Pearl gets the best joke this time as we cut to a flashback with the four in a teacup ride.

The smaller issue with this episode, is that once again, the story being told runs too short. I really do like Cartoon Network's approach to shows, running around 11 minutes, but this is a show that truly needs those 22 minutes (or half hour with the breaks). Sure, some of the episodes I've seen work within it's time frame, but episodes like this deserve more. The flashback bits lose some impact without being given enough time to sink in, while it would've been nice to get Pearl and Amethyst's side of the adventure in small doses.

Fun episode, but it definitely deserves some extra time.