WAR FOR THE PLANET OF THE APES-REVIEW 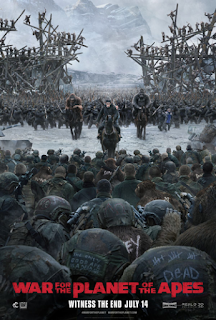 
Joking aside, no I'm not spoiling this film, some stuff here may allude to plot points, but if you wanna see the movie, you can read this review before, no big deal.

The easiest thing I could say about this film, is that if you liked the other two films, you'll love this one. War For The Planet Of The Apes is best summed up for me as the kind of movie Christopher Nolan wishes he could make. Yes, it's a Sci-Fi movie about apes becoming smart, but the underlying themes hit so hard, while the movie doesn't need to talk about it's importance, because it knows it has a statement to make.

This Apes film, picks up some years after the last one. Due to Koba's hate, the war between apes and humans has reached a point where the world has lost pretty much all hope. Humans are still dying from the simian flu, while the apes led by Caesar only desire peace. After a ruthless colonel attacks Caesar personally, Caesar becomes driven by revenge. It's a confrontation that will push the world further into an end from what we know.

There's plenty to be acknowledged about the misleading title and marketing, but I do think at the core of this, War for the Planet of the Apes is a war film, just not one we would expect. It's true, we don't get a lot of battles, in fact, the film feels more like a prisoner of war film, but the movie does hint at something deeper going on. A human child that joins the apes side, provides some hope for the world we see, but she's a double-edged sword, given what we learn about her, based on what Woody Harrelson's interesting antagonist colonel reveals about humanity. There's a bigger "war" underneath the film's story that feels relevant given today's race issues. That subtext, gives the film a strong edge, transforming a cool movie about smart monkeys, into a cautionary tale of what happens when peace can't be reached between different species (or races).

This is an amazing film, you honestly don't need me to tell you that much. War for the Planet of the Apes is a movie that tells a great story, that becomes better as you realize the themes are important to our world today, but amazingly, it never feels like it wants you to know it's important. This is a must watch for the summer, a highlight for the year.