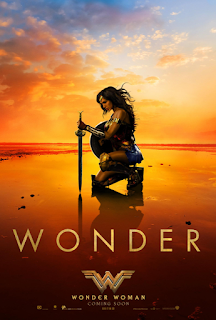 I honestly feel like just leaving it at that folks, Wonder Woman, is good, a miracle for DC, even if it ain't great. It's optimistic, the kind of film that gives you hope as you sit through it, hope that there is good in all of us, so long as we choose to listen to the right people. I sat through, admiring Gal Gadot in the same way I admired Christopher Reeve, she is a hero of good, a pure hero, suffice to say, yes this is a fun time. One more bonus before I sum up the plot, this actually feels like the kind of movie I recommend you take your kids too, especially your girls.

Wonder Woman begins with Diana, getting a letter from Bruce Wayne (yeah, the horrible movie still happened), the letter contains an old photo, the same one from before, which leads to Diana remembering her journey into the world of man. We see Diana as a child, curious and eager to fight, train with her aunt, much to her mother's annoyance. Suddenly, a spy named Steve Trevor crashes on the Amazon island, Themyscira, he brings news of a war (WWI) leading to Diana believing this to be caused by Ares, the God of war. Diana leaves to fight with Steve against the German army, thus becoming the Wonder Woman.

I love the cast here, Gal Gadot and Chris Pine especially, the moments between the two are incredible. There's a lot of joy to be found in the banter, whether it's Diana being confused by the world of man, or just bringing her good, noble sensibility to a world that's already murky and gray, she is a beacon of hope, radiating bright for this film. I laughed, I felt proud and inspired, I just wanted to scream in my awe of what feels like the first proper DC  film in what feels like ages.

I love Marvel, sure, but I also love DC, seeing the last few films do little justice to what makes these characters great, really helps make this film feel better. Sure, the movie in comparison to the MCU, is about as strong as the average phase one film (good, but not great), but that feels like a miracle after  Batman v Superman. I almost feel too stunned to comprehend this, DC has a good film under its belt, yay!

Honestly, the only things keeping this from being great are just two things. First, the third act is fairly messy and could've been a bit better with a rewrite,  it doesn't feel completely devoid of plot, but it doesn't  leave an impact like the first two thirds do. Second, looks like the DCEU also has bad villains in their quality films. That second is probably the bigger disappointment, because I did see potential in the villains we see through most of the film, there's even a scene between the mad scientist and the German general that got a big laugh out of me, reminding me of characters like Boris and Natasha, alas, the villains just end up being boring, bummer.

Outside of that though I loved it. The action was cool, director Patty Jenkins knows how to film an action scene that is both kickass and inspiring, women, you are going to feel empowered when you see Wonder Woman step out of the trenches. The final battle reminded me of the DCEU's mistake, I mean Batman v Superman, but with more clarity, as well as a character I actually cared about watching.

Circumstances being what they are, I wanna say rush to the theater for this one. Yes, Wonder Woman is not a must watch, based on quality, but it's good, which is rare for this studio, so support it in hopes that they finally get it,let this be the start of more consistently good DC films. I dug it, even if it feels a lot like Phase one from Marvel studios. Go watch it, sometimes, we all need a woman to remind us of what it means to be good. 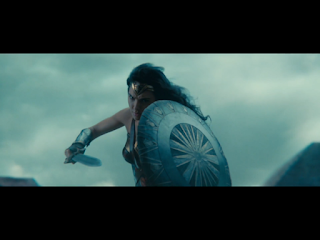