If you were wondering how this world functions in regards to meat based food, wonder no more.


I don't hate this episode, let's make that clear right now. I actually love how this episode answers why there are still foods like chicken nuggets, burgers, etc. in this world, I just don't know if we needed a whole episode focused on this topic. Diane gets a good supporting role, but I'm not sure if there's really much to lose if you cut the subplot here, even BoJack and Kelsey's pairing here feels useless as a later episode tackles their friendship much better. Anyway let's dig into the plot.

Right from the get go, we're given how food functions in this world, very much like ours. As it turns out, chickens are farmed to be eaten by people and even fellow chickens. At birth, some animals are designated to be food, while others raised to be citizens, which makes me wonder if the same is true for humans, but that's never answered.

The real meat of the story (pun not intended), begins when an escaped "food" chicken escapes from local restaurant "Chicken4days", landing her in Todd's care. Todd, the lovable scamp that he is, decides to keep the chicken safe, which he later names Becca.

Meanwhile, Diane is tasked with babysitting Kelsey's daughter Irving (voiced by Amy Schumer), a teen who is instantly annoyed by Diane. This is going on as BoJack attempts to befriend Kelsey, I won't deny there's some cute humor here, I just feel like it's kind of weak as presented here.

Eventually, while at Mr.Peanutbutter's house, the police, lead by Cedric Yarbrough as Officer Fuzzyface (admittedly the best thing this episode brings to the table) search for Becca, who Todd passes off as his wife. Todd finds a way to escape with Diane and Irving, the three then decide to take Becca to a rival chicken farmer, an actual Rooster who claims to know what's best for chicken bred to be food. It's a choice that kind of makes sense at the moment, but I don't know, the decision just feels half-assed to give the episode a climax.

They all get arrested, with BoJack saving the day after a somewhat successful attempt at befriending Kelsey (who still seems to like Todd). It's a cute way to wrap up the episode, but it just doesn't do much beyond that.

This isn't an awful episode by any means, but it just feels like a lackluster one that was built around an interesting world-building explanation. Not entirely an episode to skip, but definitely one that's easy to ignore. 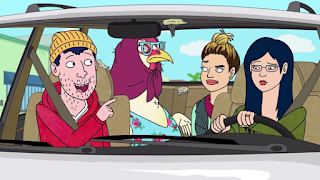