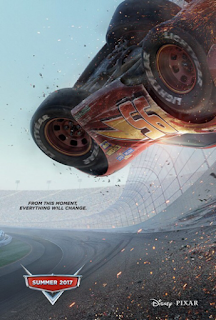 Alright, you got me, I'm the one adult who actually likes the Cars movies from Pixar, sue me.


Can you blame me? Sometimes we all need light movies for some quick fun and joy, these movies are light, but provide a lot of joy for me. The original Cars is perhaps Pixar's most relaxing film for me, while Cars 2 is overall more entertaining as a fun, spy homage, plus the score on that one is among Pixar's best, that's right I think something from Cars 2 is among Pixar's best. Even if those things don't impress you, you have to at least admit that John Lasseter's love for the road is present in those. Cars 3 arrives, not only feeling like a direct sequel to the original, but as the best in the series.

If there's one flaw in that, is that it means the previous film gets absolutely NO reference here. I get it, the last film was negative on Rotten Tomatoes, while also held up as a punching bag for critics, but a nice little nod, even in passing would've been appreciated. Sure, my stance here is perhaps the result of me liking the last film, but I do feel like there's something missing with no one acknowledging Lightning being in a worldwide race. Even a joke about Mater being a spy would've been fun to hear. Outside of that though, I don't have much to complain about here, the villain is flat and boring, while Chick Hicks not being voiced by Michael Keaton feels odd. Overall, not much negative, which is nice to see.

The story this time, involves an older Lightning McQueen being upstaged by younger, statistics based racers, specifically one named Storm. The string of losses in the season, results in McQueen, possibly being forced out of racing, causing much stress to our hero. Deciding he has one more shot to succeed, McQueen decides to train for one more race, with the help of a new trainer, the young Cruz Ramirez. Thus begins Lightning's test to reinvent himself, while also teaching Cruz about being more than just a statistics trainer.

It's not the most deep story in Pixar's canon, but I'd be lying if I said I didn't appreciate Pixar making the story about Lightning getting old. Owen Wilson actually comes off more interesting here than he has in previous entries, which may be a result of his fitting much better with Lightning's arc this time, which is accepting that its time to move on with his life. The real highlight though, is Cristela Alonzo as Cruz, sure it's easy to say I find her inspiring because it's always great to see my race represented, but honestly, screw anyone who thinks that. So what if I'm happy to see positive representations of my people? Cruz is a trainer, put down for being a trainer who wants to be more, trust me, I won't give it away, but there's some real heartfelt stuff done here, when we see her succeed in her own goals, it just feels empowering for both women and the Hispanic community.

As always, the animation is top-notch, you can see all the effort the studio makes just to make this look as amazing as it does. The racing scenes have never looked as amazing as this, while a scene involving Lightning and Cruz accidentally joining a crash derby is spectacular. If nothing else, the Cars trilogy proves to be among Pixar's most amazing strictly based on the visual quality.

It's not among Pixar's best, but it's still a fun time honestly. It's a breeze to sit through, while the emotional weight added this time is surprisingly strong, the kind of thing I'm sure most wouldn't expect from this franchise. Overall, Cars 3 is the best in the series, sure that may not mean a lot to some of you, but trust me it's worth a view on the big screen at least once.