It's time to kick off the second season of BoJack Horseman, let's do this.

Right with the first episode we're off to a great start, funny, but depressing, this is a great continuation of where we left off in the first season. The hope given at the end of season one is quickly dashed, we're back with a hopeless hero, now starring in the role of his dreams, we get a new idea of what's wrong with him, making BoJack as compelling as ever.

We start with an interview we saw open the previous episode, only this time from a young BoJack's perspective, rather than Secretariat's. It's a cute scene that quickly takes a turn for the worse, we see BoJack's parents arguing, only for his mother to then join the young BoJack. Within this single sequence, BoJack's mother, who had been portrayed as horrible before, cements her place as one of the worst mothers on tv, she is downright nasty.

Skipping to modern day, BoJack seems more upbeat about the world around him. Starting with a new work out regimen, we see BoJack is replacing his couch, much to Todd's dismay (new season new couch, cute joke), he's friendly, even to Mr.Peanutbutter as he picks up Diane to go on set with him for "Secretariat". The film's director, Kelsey Jannings, is a strict filmmaker, demanding Diane (the character consultant) do nothing but warn others of the cables on the ground. Hilariously though, Kelsey seems to melt whenever Todd is on set, taking a much kinder tone with him, it's funny stuff we get plenty of in the future.

The first scene to be shot involves BoJack, or rather Secretariat down at his worst, asking a close friend "what are you doing here?" Which BoJack cannot do properly. We never get full exploration of BoJack believing he may not even be much of an actor, but it's a fun thought brought up as he consistently fails to say a simple line. What's also brought up is BoJack's face being scanned, in case he disappears at some point in the film process, it's a fun joke, but we'll get back to that later.

Everything seems to fail to change BoJack from screwing up his line, up until he talks to his mother. BoJack's mother, calls him after reading his novel, realizing how cruel she was to him, she admits BoJack is doomed to a miserable life, because he is BoJack Horseman. After that chilling line, BoJack finally reads the part perfectly, ending our first episode of the season on a downer note.

This is a great episode to kick the season off with, it's funny and depressing, while setting up what to expect from the season perfectly. If you haven't started watching this, what are you waiting for? Seriously, this season is where the show becomes a true, must watch series. 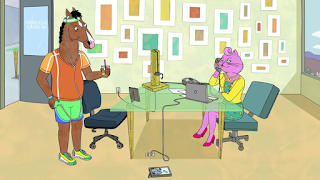