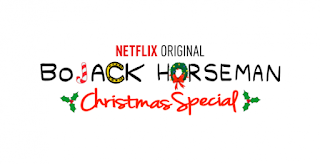 Christmas time at BoJack's is a lighter affair.

Who doesn't a love a good Christmas special? Well as it turns out, BoJack, a feature he shares with me. Yes, there are some Christmas specials I've liked, but on the whole I've never really cared for much, maybe it's the similarities found in so many, or maybe I am just a Scrooge, but I truly care so little for the specials. This one, is no different, it's fine, but it's not among my favorite episodes of the show, nor do I revisit it much, it's just kind of there with some funny jokes.

The episode begins with Todd waking BoJack up to celebrate Christmas with, BoJack doesn't care for it, until "Horsin'Around" is brought up, but even then reluctantly agrees as the Christmas episodes where his least favorites. So yes, the episode is about BoJack and Todd (with a comically oversized candy cane) watching a Christmas special, it's a meta episode. Clever, while also being a neat look to exactly how "Horsin' Around" was like, but outside some funny jokes, including a loud audience member screaming progressively worse cheers, you won't miss much by skipping this episode.

The basic plot of the episode is that the Horse tries to celebrate Christmas with the orphans. Catchphrases, audience reactions and cheesy plot points all come as Todd and BoJack add commentary over the contrivances of the story. The youngest orphan, Sabrina, mistakenly wishes for Santa to bring her parents back, resulting in the horse having to explain why Santa can't.

None of it is worth getting invested in, but that's the joke, we're not really supposed to care, we're supposed to acknowledge the cheesiness. As the episode ends, BoJack decides to watch more Christmas episodes with Todd, so it's a sweet little end. Again, there are funny jokes, but don't expect this one to be a favorite of yours when all is said and done. 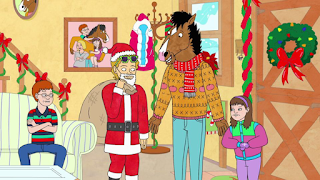