Things get incredibly dark for Diane after news of a celebrity's scandals hits.


This is easily one of the best episodes for BoJack Horseman, that's a statement echoed by so many, and for good reason. While many episodes are depressing, this episode is so much more, it is a bleak episode, devoid of hope, sure the humor lightens things, but the ending just feels so cold. It's a brutal episode, not only for the characters, but as commentary for real life issues, sure the bulk of the episode feels like a reference to Bill Cosby's allegations, but everything is played in a way that remains meaningful and impactful for women, even if they've only received minor sexist remarks, which let's face it, is highly doubtful.

The episode begins in the past, BoJack and Mr.Peanutbutter both lose an award to Hank Hippopopalous, a famed talkshow host. Skipping to modern day, Diane, BoJack and Princess Carolyn are doing a book tour, while Mr.Peanutbutter is getting ready for his new show, which is on the same network as Hank's show. After a few questions, Diane stuns a crowd after running through a list of troubled celebrities, specifically, the mention of Hank is what gets the crowd angered. It's never revealed what exactly Hank did, but it's safe to assume sexual assault, which no one, not even the media wants to believe.

As this goes on, a brief mention of the Prince of Cordovia is made, he looks a lot like Todd, which is a nice callback to an earlier episode. This subplot is pretty random, only briefly showing up, usually as a joke that gets ignored as the episode plays out. If I'm completely honest, the first time I saw this episode, I briefly stepped out early on, resulting in confusion over this segment. Watching it now, it makes sense that this is so brief and feels disconnected from the rest of the episode. It honestly feels like a statement being made about how often the media ignores sexual allegations for silly stories, only in reverse, the silly story is the minor part of the episode, ignored in favor of the serious issue.

Back to the main plot. Mr.Peanutbutter is bothered that Diane is stirring up issues with Hank, after all, Hank is the lead-in to his show. Diane, however, decides to pursue the allegations. Eventually, Diane is being supported by Manatee Fair, with the head of the magazine company deciding to support her search. A tipoff from Hank's current assistant leads to Diane going alone to a dark alley, which ends up being a ruse, Hank confronts Diane, telling her to drop the story as it will never take him down, but hurt her in the long run.

After the meeting, the head of Manatee Fair decides to drop looking into the allegations, having been convinced by her own higher ups that these kinds of stories don't make headlines. BoJack eventually decides to support Diane fully, after Diane apologizes over the way she wrote about him in the novel, Mr.Peanutbutter however, decides she's better off leaving to write the book on the explorer who has been asking for her ever since BoJack's novel hit shelves.

The episode closes with affirmation that nothing bad will happen to Hank, while Diane, sadly, awaits her plane. A nearby man looks to her, telling her to smile, as Diane acknowledges defeat.

This episode is amazing. The kind of episode I'd show newcomers to convince them that the show is amazing, despite being so dark, it truly is among the best the show has produced. 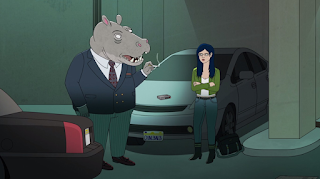