BoJack is feeling love, he's not quite used to it.

This is another pretty forgettable episode, but it sets the stage for the next few episodes, while also throwing some funny gags at us. I still think BoJack and Wanda's relationship is great as far as character pairing goes, but there's not much in this episode that feels fresh for them.

As the episode begins, Mr.Peanutbutter finds himself without an agent after finding his agent dead from autoerotic asphyxiation. The agent's death results in Princess Carolyn's agency scooping up all the clients, though Princess Carolyn herself is left with seemingly no one, besides Mr.Peanutbutter who has had money issues as of late.

Meanwhile, BoJack finds himself in shock after telling Wanda he loves her, only to quickly respond with "I don't love you". BoJack is frightened by Wanda's eventual reaction to this, only to be surprised by her not being bothered and responding with her own proclamation of not loving BoJack. As the news of the autoerotic asphyxiation arrives at BoJack's film set, his co-star, Courdoroy, reveals he had an obsession with that in the past, resulting in Courdoroy giving BoJack his equipment for autoerotic asphyxiation.

Convinced that Wanda has to love him, BoJack threatens to possibly kill himself during a session of autoerotic asphyxiation. Wanda, not caring, decides to let him, assuming he won't even attempt to do so. Though as the episode progresses, BoJack becomes more determined, eventually leading to Wanda stepping in, stopping BoJack.

As this all goes on, Princess Carolyn scoops up another client, J.D. Salinger, who surprisingly isn't dead in this universe. Salinger, manages to pitch a reality show to Wanda, while Princess Carolyn get Mr.Peanutbutter to host it. After all the hard work, Princess Carolyn still doesn't get any recognition from anyone, except her co-worker Rutabaga, who seems to be pushing for romance. The episode closes on BoJack stumbling upon the death of his co-star, a result of autoerotic asphyxiation.

We definitely have a funny episode, that gets the plot moving, but don't expect to remember this one much as the show continues. 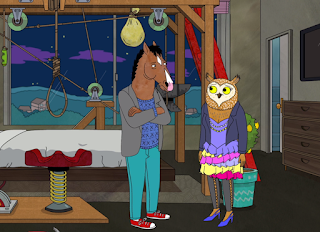