Well this was an eventful episode.

BoJack Horseman works best as a show dealing with depression, sure, the humor is strong as well, but once everything hits the fan, leaving our cast in a slump, that's when the show hits as strong as it does. So much of this episode is just despair, sadness, an overall loss of hope for the cast, it's simply amazing.

The episode begins with Diane having overstayed her welcome, BoJack seems reluctant to kick her out, while Wanda just wants her out. Todd, meanwhile, decides to become a part of improv, which BoJack later identifies as a cult, not like Scientology, which is not a cult.

On set, things have gotten worse, as "Secretariat" has become a shallow version of itself, led by a director who acknowledges it is not Casablanca. Eventually, Princess Carolyn offers a broadway gig for BoJack, who agrees as the film is wrapping up production. Things worsen though, as BoJack accidentally insults the director, leading to a lot more rewrites and re-shoots as a way to get back at BoJack.

Diane, being a depressed mess, eventually goads BoJack to stay home and be as self destructive as she's being. Wanda, decides to have none of it, resulting in a break up between her and BoJack. BoJack talks it out with Diane, eventually realizing the last time he was truly happy was with Charlotte, setting up the next episode, as BoJack arrives in front of Charlotte's job.

This is a fantastic episode, trust me I'm barely touching on the specifics here, BoJack's explanation to why he's changed in front of Wanda's eyes is one of the best lines of the show as a whole. Highly recommended, definitely watch this one. 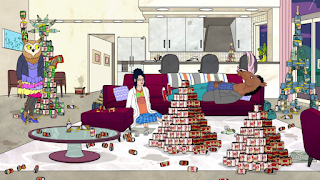