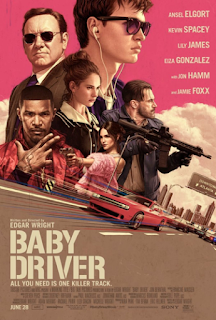 Edgar Wright, returns as a director with this kick-ass, music-filled tale of love.


I don't know if I can agree that this is the best movie of the Summer, but it's definitely a highlight. Baby Driver is just an all around, awesome symphony of classic songs. In that regard, it reminds me quite a bit of Guardians of the Galaxy, sure it's clearly not a rip-off, but admit it, you'd watch this as a double-feature.

Baby Driver, is basically a heist movie, focused entirely on the getaway driver. Baby, played by Ansel Elgort, is the noble guy, caught in a bad situation, he wants to go straight, but the bad guys keep bringing him back into the game, no matter how much he hates them. Matters are complicated when Baby meets Deborah, played by Lily James, a waitress he wants to go straight for. Of course, his boss, played by Kevin Spacey, just can't let go of his "lucky charm", resulting in Baby having to finally grow up and make his own choices.

If there's one thing I can really appreciate in this film, it's the choice of making Baby serious about leaving a life of crime. Movies of this kind are too often obsessed with the hero being complicated, often leaving the leads to have some kind of addiction to crime, not so here. Baby has depth, but he also shows no desire to commit these crimes, to him it's just a job he's unfortunately forced into, not a joy he's struggling with.

Of course the main attraction is the music, which as mentioned before is kind of awesome. The soundtrack is great, that's no doubt, but it's the use where I'm a little conflicted, don't get me wrong, I like how it's used, but I'm not sure I loved it more compared to, say, Guardians of the Galaxy's use. This is perhaps a silly nitpick, but given that the use of it did remind me of that movie, I just couldn't help but compare it, still overall it's  fun use that gives the film a lot of energy.

I feel like saying anymore would give it away, which is something I'd rather not do. This is one of the year's best films, as well as an amazing action-musical film, go watch Baby Driver, now.