Behold, the biggest shock in the whole series.

I've mentioned before how BoJack Horseman is best when dealing with depression, well this episode really delves into that, taking the show into some really dark places. Intentionally or not, BoJack is a monster,a likable monster, but a monster nonetheless. I don't think I've ever met a fan of this show, who doesn't think this episode takes BoJack to his most fucked up point to date, are there more depressing moments? Sure, but nothing comes close to how messed up this gets.

The episode begins where we last left off, BoJack reunites with Charlotte, who invites him to come over to her place and meet with her family. The show, hilariously gives us a theme song on her family, "Kyle and the Kids". During breakfast, Charlotte convinces BoJack to teach her daughter, Penny, to drive. The drive allows them to bond a bit, as BoJack (somewhat) reveals why he's actually there.

Despite claiming to only be in the area for a boat show, BoJack eventually stays with Charlotte for months. The long stay, results in BoJack taking Penny to her prom, when her crush refuses to do so.

The prom ends up being a bust, with nothing fun going on. Penny, BoJack and Penny's friends decide to leave, instead partying their own way. Things get out of hand though, as Penny's best friend ends up unconscious after having too many drinks. BoJack leaves Penny's unconscious friend at the hospital with her date, telling him to create an alibi as to why BoJack wasn't around. BoJack tries to wave away Penny's concern by stating "sometimes the right choices aren't the best choices". After the long night, Penny tries to convince BoJack to sleep with her, BoJack declines, saddening Penny.

BoJack joins Charlotte by the fire, enjoying a nice conversation that ends with a kiss. Charlotte breaks free, deciding BoJack has to leave by the next morning, despite BoJack trying to convince her that their love is real. As we see that painfully sad scene play out, we see Penny await BoJack in his boat. Charlotte, shortly after, starts to investigate what BoJack is doing in his boat, finding Penny and BoJack in the process of stripping down for sex. The reaction from Charlotte is one of the most memorable the show has given us, which leads to BoJack going back home, in a great sequence that just goes perfectly with the theme. Finally we close out on Diane, still living in BoJack's home, as he returns with emotional pain.

Easily among the best episodes the show has produced, the amount of dark, twisted moments this episode brings as burned into not only my mind, but the minds of so many fans. 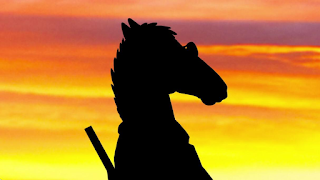