BoJack finds potential true love in a woman out of time.

Keeping up with greatness, this episode is a ton of fun, while introducing a fun new dynamic for the season. Lisa Kudrow is introduced as a new love interest for BoJack, Wanda, who has been in a coma since before BoJack's show, which adds to some of her humor. It's a cute episode, that proves love can win, maybe?

Right at the start we get to see some of the bad effects from BoJack's novel, annoying dates. We see a succession of dates, all asking about, or making references to the novel, leading to a very tired BoJack, until he meets Wanda, a woman who knows nothing about the 90's, making her of interest to BoJack. They hit it off really quick, BoJack even starts to develop feelings for her that aren't sex related, which funny enough, causes alarm for BoJack.


Meanwhile, Todd develops a crazy idea, making Disneyland a reality. Despite BoJack constantly reminding Todd that Disneyland is in fact a real place, Todd believes it is only a fable parents create for children. He even manages to avoid a lawsuit from Disney, which is hilarious how the lawsuit manages to get dropped, resulting in Todd's theme park venture to grow.

Eventually, as BoJack falls deep for Wanda, another man appears, Alex, voiced by Joel McHale, Alex has been in a coma about as long as Wanda has been. It's a comical twist that leads to BoJack conspiring to get rid of Alex, leading to a surprising revelation, Alex is a KGB agent. Wanda has none of it though, the mere idea of BoJack spying on others just bothers her, which leads to BoJack trying to win her back, as Todd's Disneyland falls apart. BoJack succeeds, while a hilarious, and somewhat romantic scene of Mr.Peanutbutter saving Todd plays out.

Overall, this is a lighter episode for the show, but it's just hilarious and chock-full of great character moments. 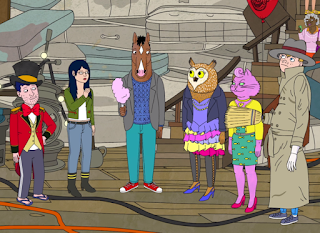