After a surprise birthday party goes bad, we see tales of love from each of the main cast.

It's another fun episode, with quite a lot to take in. There's nothing too emotionally heavy here, but it is nice to see an examination of various relationships and how they function. If there's one thing I did not notice on my first viewing, was Todd's reference to a later episode, I love when shows set those kinds of things subtly. Before I dive into the plot, or rather plots, just remember, there's a great punchline set up early on in the episode, if you pay attention anyway.

So after a fight between Diane and Mr.Peanutbutter over Tony Curtis ends the party, we follow Princess Carolyn, who offered to take Todd home. It's a normal ride, until Princess Carolyn notices a kid on the street who looks like her boyfriend. This leads to her calling Vincent Adultman, trying to get to the bottom of everything. Todd waits in the car, as his phone and Princess Carolyn's workphone  fall in love, it's an odd, but funny surreal joke. Back to Vincent and Princess Carolyn, Vincent, and his son Kevin visit Princess Carolyn, though never at the same time, resulting in a break-up. It's a sad thing to see end, as the Vincent Adultman joke was funny, but understandably, the gag just couldn't go on forever.

The next story, involves BoJack and Wanda. Wanda tells a cute joke, with a confusing punchline, resulting in BoJack being confused and questioning whether or not they have a rushed relationship. I really do like the BoJack, Wanda dynamic here, there's something incredibly innocent between the two that just works. Anyway, BoJack eventually hits a deer, resulting in the two having to rescue the poor deer, the teamwork here really highlights why the two work as a couple. Their story ends, with optimism as Wanda tells a new joke that brings clarity to everything.

Finally, we see a continuation of Diane and Mr.Peanutbutter. There's an argument between the two, with Diane ready to fight at every turn, despite Mr.Peanutbutter wanting to bring joy between the two. It's a cute way to cap the episode, as there's a reaffirmation of their love, yet fear of a need for change to work. Still, everything ends on a happy note, with a great joke.

I really loved this episode, it's a stand out episode with some great use of character interaction. I'm definitely gonna savor this as we move into an episode I'm not the most fond of. 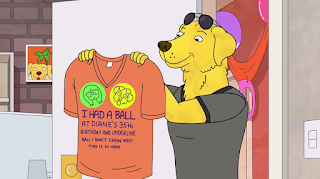