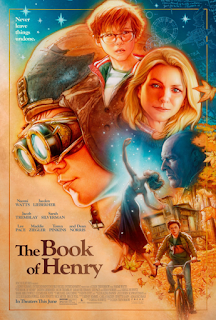 Well this certainly was a movie I saw.


Let's get one thing straight, I don't know if Colin Trevorrow will be wrong for Star Wars, sure pointing at his filmography is an easy no, but remember, those movies, much like the Marvel Studios films, are being overseen by the execs. In other words, even if Colin is bad at his job, Disney, will likely swoop in to make the film passable, it's just how these things work for them right now.

With that in mind, let's dig into The Book of Henry. I'm not gonna mince words, so I'll just come out and say it, this movie is absolutely a piece of shit, a poorly made film that feels written for a comedy, as a parody on dramas, that somehow became an actual movie. There's not a consistent tone to be found, the character motivations are bizarre to say the least, while no one comes off particularly likable. Despite all this, I enjoyed the crap out of this film.

Do you even care if I spoil this? No? Alright I'm spoiling the film, so turn back now if this matters to you for some reason. So, Henry is a boy genius, he believes in being kind to others, despite being a prick to anyone he deems stupid/childish, which appears to be everyone. Henry's mom, played Naomi Watts, is a typical mother, until the script calls for her to be a man(woman)child, which is always random. One second she's competent, the next, Bobby Moynihan of SNL fame, here playing Naomi's boss, is looking at her as confused as we are that she knows nothing about her financial situation.

The plot thickens though, as Henry reveals he's been documenting his neighbor, who has been abusing his friend. What's weird here, is that now thinking about it, we really don't get to learn about Henry's friend, outside of her doing ballet, being abused by her stepdad, and having a special handshake with Naomi. Not that we need to know everything to want her to stop being abused, but it'd help get us more invested, plus I'd rather get to know her more, than see more scenes of Henry being a dick to anyone who isn't Henry.

Suddenly, as if my prayer was heard, Henry develops a tumor, right of nowhere. Yes, we see Henry having a seizure, right out of nowhere, which should be shocking, but all I thought was fuck Henry, as well as wondered whether or not Naomi's character understood that people shouldn't touch those in a state of seizure. So Henry gets hospitalized, but he still can't stop being a dick as he still corrects the people working on his tumor. Henry dies, but not before dissing his mom some more (correct me if I'm wrong, but did Henry say he didn't teach his mom, how to be a mom? ).

So now that Henry dies, Naomi breaks down so much that she starts making desserts for breakfast, lunch, and dinner. Even Henry's little brother (who I kinda forgot about) is looking at his mom, wondering what's wrong with her, almost as if Henry has rubbed off on him, making him another dick. Eventually Naomi gets fired, because as it turns out, she has over 680 thousand bucks in her account, which Henry never brought up because he's an asshole.

As it turns out, the titular book, is one that Henry left behind for his mom to murder their neighbor, complete with an overly complex voice recording of Henry. I say overly complex, because at times it plays less like a recording and more like Henry is talking to Naomi from beyond the grave. Hilariously though, Naomi can't kill the neighbor upon realizing that Henry was just a kid, so why the hell is she listening to him? But it's okay, the neighbor kills himself once the principal calls child services, so we end with Naomi adopting the neighbor's step daughter as we close, wondering whether or not what we witnessed was made by human beings.

To say this is bizarre is an understatement, sure, parts are just bizarre, but there are shifts in the tone that come right out of nowhere. Scenes, meant to be cute and charming just feel odd and uncomfortable. For example, early on we see Henry, handling the bills, while Naomi plays  Gears of War which comes off less charming, and more confusing, as, like I previously said, Naomi is shown to be a competent mother at times, yet here it's almost as if she has brain damage, or maybe Henry and Naomi swapped bodies, but never mentioned it throughout the film, trust me I'd believe it after the movie.

Before I go, I'd just like to add, this feels exactly like the kind of movie Naomi Watts supposedly wanted to do in that episode of  BoJack Horseman. Normally I'd say skip this, but trust me, you have to see this to believe it.