Much like the previous season, the finale here is much weaker than it's penultimate episode. That having been said, I actually enjoyed this episode quite a bit, even if once again, it just feels like set up for where the next season was going. The difference however, is that unlike last season's finale, there was still plenty of heart to go around this time, resulting in a more emotional send off for the season.

Opening up, once again where we last left off, Diane has proven to be doing nothing but waste her time at BoJack's place. Within this season we've seen a real kindred spirit connection between BoJack and Diane, maybe it's not the love BoJack thought of last season, but you can see so many similar traits between the two by the time this season ends.

Anyway, it turns out the studio isn't mad at BoJack for bailing out on "Secretariat", if you remember the first episode of the season, BoJack's face was scanned in case something happened. BoJack acknowledges the finished film is good despite not being what Secretariat was really like, while also acknowledging he's not the actor on screen, it's just a digital face. The producer ignores this, deciding to start the Oscar campaign for him with the help of a new assistant, I'll get into her more when I start reviewing the next season.

Back with Princess Carolyn, she sets off to start her new company with Rutabaga, only to kick him out, when she realizes he wants to abuse her emotions. As her new agency starts up, Princess Carolyn recruits Diane to be her celebrity online management, which Diane, ultimately accepts. During her first venture, Diane reunites with Mr.Peanutbutter, a happy and sweet ending for the two.

Taking up a good chunk of the episode, Todd is on the "Giggleship", a boat for the improv crew, led by Copernicus. Having left BoJack, who he assumed wanted him gone, Todd quickly realizes there's a much more twisted layer to improv than he thought. Eventually BoJack reunites with Todd, reaffirming their friendship as Princess Carolyn calls BoJack, telling him that playwright Jill Pill, badly wants him for her show, BoJack doesn't remember her until he thinks about the "other show" he was on.

Overall this was a fun episode. The major weakness, is that the Todd plot, while somewhat built up, still feels like it came from nowhere. Still this was a superior season to the last, and I hope you read when I start with season 3 soon. For now, I need a short break. 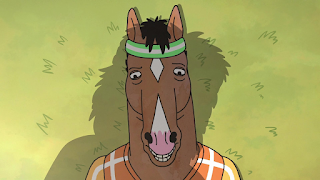