This is another solid episode that perhaps isn't as memorable as it should be. The humor is solid, the themes are great, yet it's not something that sticks as long as some other episodes do. That's a sad truth for many things, good as they are, some things just won't stick as much as other things do, it has nothing to do with the quality, it's just how things work out.

So as the episode begins, BoJack is talking with Wanda on the phone, who shows annoyance to the fact that BoJack is only calling her because he's used to talking to Diane while heading to work. Which brings up the subplot of the episode, seeing Diane in Cordovia, taking notes on the self-obsessed Sebastian St. Clair. Back to the main story, BoJack arrives on set to find that "Secretariat" has been altered, the key Nixon scene having been replaced with a wacky Christmas scene. Suffice to say, BoJack dislikes the change and decides to shoot the Nixon scene with Kelsey regardless.

Thus, BoJack assembles a crack team to take the shot, which in typical BoJack fashion, is the furthest thing from competent. Todd, Princess Carolyn, Mr.Peanutbutter, character actress Margo Martindale (yay, she's back) and some tv repairman who just happened to be there, assemble to help BoJack and Kelsey. Meanwhile, Sebastian (voiced hilariously by Keegan-Michael Key) keeps trying to get Diane to only focus on his impressive endeavors, rather than actually assisting the children.

Eventually, BoJack's team successfully creates a diversion for him, Kelsey and Mr.Peanutbutter to break into the Nixon library. While breaking into a museum to distract the police, Princess Carolyn finds herself drawn to a painting, imagining a peaceful life where Vanessa Geeko is her servant, while Margo Martindale goes wild, attacking the police. While in the Nixon Library, a lone security guard confronts our heroes, but decides to join in their film, playing Nixon as he has always dreamed to do so. After some issues with crying on film, BoJack manages to capture the scene perfectly.

Shortly after, BoJack learns a harsh result of shooting the scene, Kelsey has been fired from the film. BoJack is filled with guilt and disappointment, until he arrives home to find Diane. Diane abandoned Cordova, but can't admit she has to Mr.Peanutbutter, resulting in the episode closing with the failure of our two leads.

Definitely a great episode, even if it's not among the best. 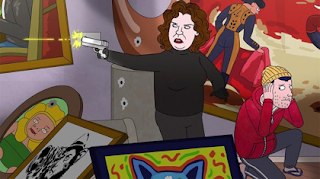