A murder mystery unfolds in front of the cast of "Horsin' Around".

I honestly love this episode, just so we're clear. It's a goofy episode between BoJack, Sarah Lynn, Joelle (voiced by series regular Allison Brie) and Bradley (voiced by Adam Conover of Adam Ruins Everything fame) trying to find a now-deceased Herb's missing book. The message, especially brings a lot of that BoJack Horseman depth we've come to expect.

The episode begins with the funeral of Herb Kazzazz, who, surprisingly did not die of cancer, but of a peanut allergy. It's a funny enough, albeit dark intro, that's made all the more charming with Henry Winkler (as himself) giving the eulogy. A quick side note on Winkler here, I love how everyone acknowledges him as that guest actor from Law and Order:SVU,  a funny, dumb gag to be sure. BoJack gets to catch up with Charlotte here, which eventually gets him to meet up with the cast of his old show.

As the reunion plays out, Sarah Lynn is given a message from Herb, he wrote a book that he wished to publish upon his death. The search for the book becomes a mystery quest for the four, one riddled with memories of their time on the show.

Meanwhile, Princess Carolyn tries to get Henry Winkler to be her client, resulting in her telling tales of how she knew Herb, despite never having met him. It's a funny sub-plot that gets funnier as it becomes an excuse for Mr.Peanutbutter to get Princess Carolyn to get more and more convincing about her time with Herb.

Another sub-plot, involves Todd stepping into the old prop that turned Steve Urkel to Stefan Urkell. It's a short, goofy bit, ending with BoJack bringing Todd back to normal by questioning his style. I just personally love how the whole bit of cool Todd plays out.

Back to the main plot, BoJack and the "kids" eventually find the location of Herb's book, or so do they think. It's revealed that Herb's book is missing, with the main suspect being Henry Winkler. The truth as it turns out, is that Henry did steal Herb's book, but not to take his credit, but instead to spare Herb's name of ridicule. In the end, Herb's book was horribly written, while BoJack, as it turns out, was just trying to create greater meaning for Herb's death in trying to understand why he died.

This is another goofy episode for the show, but one with an edge, the dark humor is appreciated, while the understanding of loss is full of that BoJack flair that always works. 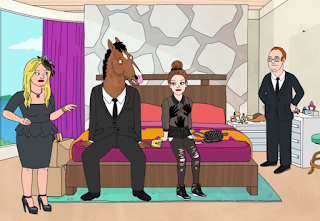