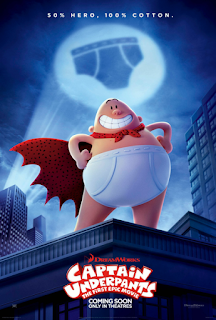 Captain Underpants is a superhero I never thought I'd enjoy as a child. The books always seemed to lean heavy on potty humor, which was something I've hardly ever liked, even as a kid I thought that this type of humor was bad. At some point during middle school though, I remember coming across one of the books, I can't remember which, I'm thinking it was possibly the second, but the point is, I found myself pleasantly surprised. I was actually entertained, granted I never sought the books beyond that, but thinking back to that, maybe I should have.

Now, in 2017, we have Captain Underpants:The First Epic Movie, a fun adaptation of the series that is very true to the source material, at least in tone, spirit and humor. This film is just utterly charming, from its neat animation style, to its humor, I was entertained throughout the entirety of this film, it's the kind of superhero cartoon I wish I had been following as a kid. It's truly bizarre, despite being an adaptation, this feels like the most original superhero movie of the year, perhaps it's my lack of knowledge to the material, or just the absurdity, but I can't think of anything else that felt this fresh for superhero movies since, perhaps the first Guardians of the Galaxy. I truly hope this isn't the only epic movie we get for this franchise.

There's a lot of heart to back the humor of this film, which is something I genuinely find satisfying. The story begins with best friends, George and Harold (played by Kevin Hart and Thomas Middleditch respectively), they're artists responsible for their own superhero, Captain Underpants. When their school principal, Mr. Krupp (Ed Helms) tries to separate the two, they work hard to stop him. One thing leads to another, resulting in their principal being hypnotized into believing he is Captain Underpants. Their little prank brings about consequences, when an evil scientist, Professor P (voiced by Nick Kroll), becomes their teacher, resulting with the kids having to save the day with the help of the hypnotized Krupp.

I like the friendship between the boys, we see how close they are and it gives the film quite the emotional edge, the film makes sure we care. The humor is strong, in fact I'd argue it's approach is Deadpool times ten (the fourth wall is demolished by the intro), but that it went on to make our cast likable is just amazing. The boys even find time to understand why their principal is so cruel, which is just so rare in kids films, it's nice to see characters acknowledge the hardships others have. Even more surprising, the film has no bully character for the kids, a rarity for kids films, especially those set in schools, lacking that, the film can focus on not only the laughs, but fleshing out why any of this would matter, it's a treat.

I even have to give props to the cast here. I'm fine with celebrity voice casts, but fully understand why others despise them, I can safely say this is a great cast. I even liked the actors they got for the kids, sure I would've preferred they get actual kids to voice here, but for what it's worth, their voices truly shine here, everyone gels with their character really well.

Much like 2011's Winnie the Pooh, as well as 2015's The Peanuts, Captain Underpants is a love letter to long time fans, I can see that, even as a non-fan. I loved the humor, the heart and the animation, I highly recommend this, go watch it and feel like a kid again. 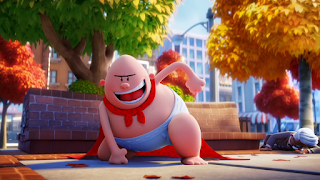