"Hey, aren't you the kid from Harry Potter?"

This isn't a very memorable episode, especially following the previous one, but it's among the more solid "forgettable" episodes. What really strengthens this episode, is that this is the first time we see an aggressive Mr.Peanutbutter that feels natural and in character, which has never worked all that much before. Also a highlight, the guest star of this episode, he's probably among the funniest guest stars to appear in the show to date.

The episode begins with BoJack getting ready for Wanda's new show, "Hollywoo Stars and Celebrities:What do They Know? Do They Know Things? Let's Find Out!", a game show produced by J.D. Salinger, hosted by Mr.Peanutbutter. Meanwhile, Todd acts as an intern for Salinger, who will give a pen to whomever impresses him the most by the end of the show.

Right from the get go, BoJack does poorly as Mr.Peanutbutter throws hard, random questions, showing a malicious intent. Things get worse when Daniel Radcliffe, and yes, it is Daniel Radcliffe, joins the show to compete against BoJack. Radcliffe gets the easy questions, while BoJack gets hard ones, a dynamic that changes once BoJack realizes Mr.Peanutbutter's weakness. As BoJack begins winning, Radcliffe gets frightened as he's doing this to donate the money to charity, BoJack doesn't care, until Wanda confronts him. BoJack starts a new losing streak, resulting in Mr.Peanutbutter pushing him around repeatedly.

Eventually BoJack fires back, insulting Mr.Peanutbutter, which leads to the show stopping so the two can finally talk it out, regarding specifically BoJack's behavior. BoJack apologizes, but Mr.Peanutbutter can't just accept, at least he can't until Wanda demands he end the show on a happy note. The solution ends up being Mr.Peanutbutter, kissing BoJack, so that he understands Diane's experience.

The episode ends, with BoJack, given the opportunity to give a million dollars to charity, after one last question. Rather than give the real name of the actor who played Harry Potter, BoJack decides to be cruel and answer with Elijah Wood, resulting in the money being burnt.

Again, it's not a memorable episode, but it's got fun jokes, a great guest star, while making great use of Mr.Peanutbutter, it's a fun time. 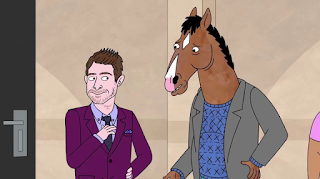