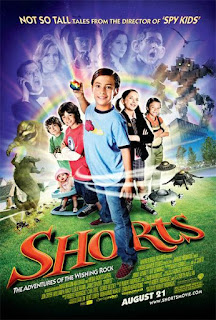 As per tradition, this January of Suck ends with a weird kids movie, this time, Robert Rodriguez gives us Shorts.

Upfront, this is bad, why? For all the same reasons that previous Robert Rodriguez kids movies are bad, gross, lazy, written for kids, without an understanding of what kids actually enjoy (despite his kids often providing the ideas). It wouldn't be so bad, but what makes this feel like a bigger loss is that it not only has passion behind it, but you can see where a better movie could've been found, which is a real shame.

As the title suggests, this movie is a series of shorts, centered on the misadventures that arise after a small town gains a magical, wish-granting rainbow rock. It's a cute concept, with some pretty creative ideas that feels like Rodriguez was trying to capture the magic of films from a bygone age, sadly the attempt is derailed by having the humor and approach to story be more modern. I'm not saying modern sensibilities are bad, in fact they're necessary for art to continue to flourish, the problem is that Rodriguez clearly is out of his depth when trying modern approaches to storytelling. Sure, Robert is a talented director but not for his kid movies; why? The effort he puts to making his kid movies goes all in the concept... as well as trying to be hip with them, which is why they're just so stupid.

I root for Robert Rodriguez, I root for imaginative ideas, but I do not root for stories being condescending and dumb just cause kids are the target audience. The best kids movies tend to work because they avoid trying too hard to connect with kids, they are made for them sure, but they avoid trying to be up to date with what kids like, say, or do, after all trends come and go. Shorts isn't the worst offender of Robert's work, but it doesn't work precisely because everything is aimed at what kids liked at that time.

And that's the end of January of Suck 3. It didn't end with a bang, but I must admit this was a fascinating run, filled with movies that I despised, movies I surprisingly enjoyed, as well as movies I wish were better due to the passion behind it. Coming up soon I have the best and worst movies for 2017 to talk about, as well as a best and worst movies for January of Suck 3 list. I hope you all read it and I look forward to your feedback.

P.S. James Spader is great in this movie, I just wish it were better.