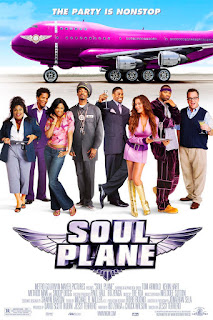 Ever wanted to see a racist version of Airplane!? No? Well too bad, here it is!

I'm not sure if I got sick watching this, or if I was already sick watching this, but either way this did not help. Soul Plane, a well known punchline for bad films from the last decade, may just be one of the worst films I've ever sat through, if not the worst in January of Suck. The only compliment I can give this is that it's short, doesn't feel like it, but at least the film ends early enough for me to have plenty other things to do.

While it may have it's fans (I remember a lot of people my age liking this back when it came out), seeing it now is beyond uncomfortable. A big part of it being hard to get through comes from the humor, most of which is just racist (also the homophobic stuff doesn't help), while the least offensive stuff is too basic to even be funny, making so much of this a slog to get through. It's painful, which is not helped by the film barely having a plot. It takes about 40 minutes (nearly half the movie) for the plane to take off, from there we get small stories from various passengers,with the main focus supposedly being Kevin Hart as the owner of the Soul Plane, but even he gets sidelined for most of the film.

This is an awful film, if I weren't so sick now I'd go much, much farther to insult this. Soul Plane isn't funny, all the talent on hand is wasted, because despite how awful it is, a lot of these actors have been funny elsewhere. That my only thoughts out of this one are the various insults made by The Boondocks is not a good thing, this rightfully deserves to be called one of the worst movies ever made.