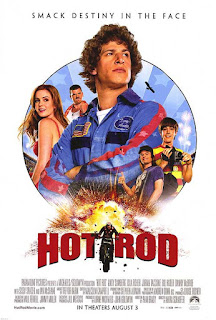 I actually enjoyed this one, genuinely I mean.

Honestly, this movie was not in my plans, I had another film lined up, but this one was available so I said why not, it seems to fit. Looking at the film though, Hot Rod was probably unfairly treated, it's not perfect but it's a cute enough comedy. Some jokes land, others don't, but it never consistently feels awful, there's a charming goal (lead character, Rod is doing stunts to raise funds to save his step-father) with a funny twist to it (he does this because he cares, but wants to kick his ass) so I smiled more often than not. It was a surprising way to fill the gap, but I can't say I regret it.

Before you ask, no I did not check out why the film was trashed, nor do I have a strong urge to do so, I'm sure critics have their reasons, I have my own reasons of enjoying this, it's fine. I'm probably gonna regret choosing this movie to talk about this, but, people really need to stop trying to create a rift between critics and regular fans of film. Just to make things clear, critics are fans, they're just fans who learned to talk about films, write about them in detailed lengths, if they disagree with your opinion, who cares? All critics don't agree with each other's opinions as well, sometimes they're overwhelmingly similar, but that means nothing. Are there problems in film criticism? I think so, but attacking critics every time they disagree with you is stupid, I mean going back to this film, I enjoyed it, but I have no interest to argue with all the critics who trashed it, their lack of enjoyment does not take away my enjoyment. It's okay to disagree, we should all learn to let go of such hate.

As for Hot Rod, well I laughed, so it's the rare January of Suck movie that I think is actually good. The cast is charming, the jokes usually land, the stunts, while always going wrong,  are fun and it's all well meaning and sweet, I enjoyed this goofy adventure. Hopefully we go back to sucking though, cause otherwise why am I even doing this theme? Until then, I recommend you watch this if you need a few laughs.