THE ADVENTURES OF HERCULES-JANUARY OF SUCK 3 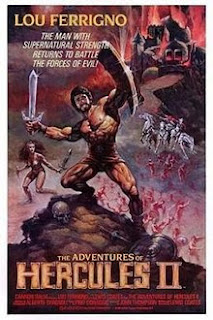 Uhhhhh, so I made a mistake in watching the sequel before the original, oops.
Plain and simple, I enjoyed this cheesy film, yes, it is flawed but there is a charm to it's weirdness. The Adventures of Hercules, along with it's predecessor (I assume) are the kind of movies that you just don't see anymore, unapologetic fantasy films that relish in being strange and unrealistic. The film is riddled with bad acting and convoluted storytelling, but it embraces it's own image, which is admirable, a film that doesn't care if it's bad or not, just being proud of what it is, I dug it.

If I saw this as a kid, I'd probably love it even more I must admit, it certainly has the makings of good Saturday morning entertainment. The acting is clearly bad, but as a kid, considering how the actors are still somewhat committed to the moronic lines, I wouldn't have noticed, even Lou Ferrigno, who at times looks uninterested to even be there, gives a somewhat believable performance, at least if I were a kid watching this. Watching this as an adult does highlight how bad the acting is, as well as how stupid the lines are, but again there is a charm to seeing a film do that stuff unapologetically. I don't love the film, but I can acknowledge that what it does right would make a younger version of myself a huge fan.

While I doubt I'd see more films like this in modern day (Thor:Ragnarok and Guardians of the Galaxy are the only modern films I can think of that remind me of these types of fantasy films) I'm glad I can still go back to the past of film history for this. A cheesy film, but definitely a fun, unapologetic fantasy film, I enjoyed it and if you're in the right mood you might enjoy it too.