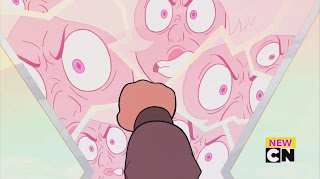 Pink Diamond is here.
I liked this episode, but I will admit upfront that I mainly liked it for the possible foreshadowing. I bring this up, because beyond the new information regarding what may have caused all this I wasn't all that interested. In fairness though, a huge chunk of the episode is dedicated to revealing Pink Diamond so it's fine that the episode mainly works towards that, I just wish Stevonnie being trapped in a jungle like planet was more interesting.

Beginning where we last left off, Stevonnie takes center stage as she manages to survive a crash landing. Lost in a world filled with wild creatures, Stevonnie quickly finds ways to survive until found. Along the way she finds a base similar to that found in the moon, sleeping within, Stevonnie has a dream. Tiny, inside the living room of Connie's home, Stevonnie notices Connie's mom, she's a giant on the phone, talking about business apparently. As the conversation continues it becomes clear she's commanding Gem warships, still ignoring Stevonnie. Connie's mother eventually becomes a stand in for Yellow Diamond, while Stevonnie begs for her own worlds, Yellow insults Stevonnie for her childish behavior, eventually leading to our reveal, Stevonnie is taking the place of Pink Diamond. The episode ends with the rescue of Stevonnie, but what does it all mean? Once more I feel like this season might be our last, if not the next.

So, I doubt the show is gonna play out to expectations, but is Connie's mom somehow connected to the Diamonds? I mean there has to be a reason why she stood in for Yellow, which might make things interesting. If nothing else, if it turns out Connie is somewhat of Gem herself it would make sense, Steven can fuse with her, which at this point I assumed it was because he was half human, but what if she's part Gem, this may hint at that. That's not the big reveal though, the big reveal is Pink Diamond, who looks to be a small Diamond, which puts things into a new perspective. If the way she acts here is accurate to what she was like, that means she was essentially the younger sister of the Diamonds. Blue probably liked the childish Diamond, while Yellow held a deep hatred, leading to the eventual murder that has been hinted at, maybe it doesn't play out that way, but it's plausible now.

This episode provided a few answers, but a ton of juicy questions, I hope we get more surprises soon, this is too good to hold off on for a while, as is though, this is a fine episode.