THE LAST AIRBENDER-JANUARY OF SUCK 3 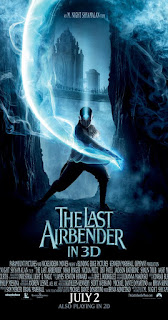 These guys just need a metal bender like Bender Bending Rodriguez to save the day.
I honestly was never a fan of this show, that much I feel I should admit. While I know the show has a lot of fans, I always found the humor to be forced and some of the story was just too derivative for my tastes. That all being said, it is a show I've grown to respect, again I'm not a fan, but I can acknowledge it did plenty right, it just never hooked me in; however I could imagine a version of the show that could grab me, this movie isn't it.

Maybe it's the poor effects, maybe it's the direction of M.Night Shyamalan, or maybe it's the movie condensing of an entire season, seriously, 20 episodes into a 90 plus minute film is not a good idea. Sequences are never fully developed, backstories are explained by force in the most random of moments and character development is pushed aside for a checklist of recreating sequences of the show. I'd say it's a bore, but it's more like a confusing mess that becomes hilarious to witness, not helped by poor CGI that hardly illustrates anything; early on, as a rebellion starts, we see Earth benders summon their might for a slow moving pebble, it's hilarious. That no one acknowledged the script was a cliffnotes adaptation just makes it all so surreal, has anyone met a human who talks purely in plot? I can't say it's entirely the fault of the actors, but in rushing everything all performances (minus the guy who is Uncle Iroh, here pronounced Eroh) are flat, boring, and tell us nothing about these characters besides where the plot must now move. The biggest insult for me though, is that in condensing a whole season, they've erased (for the most part) Appa and Momo, the adorable animal sidekicks, thanks for removing the cute fun guys.

Every single discussion on this film brings one major complaint to it, so I'm addressing it here, this movie whitewashes the cast. I understand that technically there was no definitive race for these characters in the show, but the fact is that it was an Asian, largely Japanese, influence so the characters should be people of Asian descent. Which the film makes worse in a few major areas, for starters I noticed there were some non-white people in the water tribe at the start, except for the leads and their relative, which is messed up; worse yet though, the nation we see almost entirely made up of a specific race is the Fire nation, the bad guys. That the film essentially features white good guys, fighting tyrannical brown guys should have raised major flags, "it's okay to be diverse, but only if you are evil so our white hero can stop your evil conquest" is a pretty shitty way to handle race. No one watching this movie desired white leads, at what point did anyone think it was okay just because no one in the cartoon ever said "I'm Japanese", what a joke.

There was no way to fix The Last Airbender easily, I'll admit that, but if they had to turn it into a movie they should've scrapped more plot points to focus on character development and coherent story telling. Personally I see this working as four films, part one on most of season one, part two as the North Tribe and the early stuff in season two, part three on everything after Appa is stolen, till the end of season two and the fourth movie focusing on season three. Again stuff would have to be trimmed, but it wouldn't be as rushed at least. Though who knows, maybe that cliffhanger would've build up to a better sequel no one was asking for.