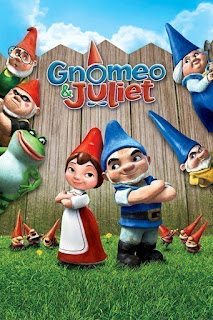 YEAH! FUCK YOU SHAKESPEARE!
Is it really worth getting mad at this? I mean yes it's stupid, but as far as bad animated films go, this is harmless. That's not to say this isn't a bad film, it is, but seeing it after years of hearing how bad it was, honestly I've seen worse. Even when the film is presenting stupid puns and stupid jokes, Gnomeo & Juliet is more dull than infuriating, as it's all basic, but presented without much loud or annoying effort commonly found in bad animated features.

Obviously going by the title you know it's inspired, as well as partly a parody of Romeo & Juliet, the famous tragic story. At first it's not an awful take, with the animation being a bit cute, the humor, while dumb is also clearly geared towards a young audience, so it's harmless. About five minutes in though, I reminded myself that this was no small, independent feature, it was also not a class project, which is how it would've been more forgivable. For some reason, that's how the film feels half the time, not like a film intended for the mass, but a small film someone made to show off that they could, but given that this was somewhat of a pet project for Elton John, that is definitely not the case. With that in mind, it is easy to give this movie a small pass, after all it's not gonna bother you all that much, but it does make you wish it were more entertaining, because it clearly had money put into it, so it's not like a project where we could easily ignore the shortcomings.

If there was one thing that managed to make me laugh, it is the inclusion of Shakespeare in the story. You read that right, Shakespeare appears in this, in statue form, he talks to Gnomeo and I laughed hard. Before you think it's because he has something funny to say, he doesn't, I'm not sure if kids will like his jokes, but for me I laughed because the film unintentionally shits on his work. Gnomeo tells his tale, while Shakespeare explains the similarities to his own work, while then mentioning the tragedy of it, while Gnomeo tells him off, saying he can make a better ending. It's meant to be a cute joke, possibly a subversion of the story, but it comes off more like the filmmakers are just shitting on the original ending, I mean, by no means is Romeo & Juliet one of my favorites, but even I don't have the balls to do that.

So is it bad? Of course, but it's more boring than annoying. I would rather kids not watch this, but if they chose to I wouldn't object to it, I'd just ignore the whole thing as it plays.

P.S. It is amusing to see old Professor X talk to the young one.