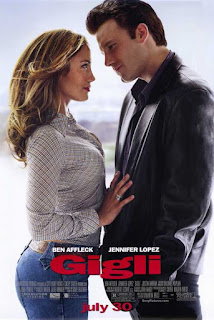 This is one of the worst movies ever made? Really?

Gigli often falls in a lot of "worst movies ever" lists and I have to be honest, I can't see why. To be clear, I don't think the movie is good, or smart even, it is a pretty dumb film that doesn't know it's dumb, it even gets unintentionally hilarious at times because of how dumb it is, but it's not awful. Even if I took everything at face value, not finding the humor in the awkward or dumb moments, this still wouldn't land in my worst movie list, it's a harmless romance (well okay some of it might be homophobic, but I don't think any of that was done out of malice) film that is odd, that's about it.

Before we get into why I think it got the hate, I just want to emphasize that I did enjoy my time with this. As mentioned before this is a dumb film, it's about Ben Affleck and Jennifer Lopez playing essentially themselves (as kidnappers) dealing with the mentally challenged brother of a federal prosecutor. Ben's character, Gigli, is a bit of a moron, while Jennifer's Ricki is a smart lesbian who always explains everything to everyone she encounters. There's humor (again unintentionally) found in various conversations and scenes in the film, including moments where the film tries its best to make their kidnapped victim have heartfelt scenes, despite the lines being uttered being too odd or silly to work as heartfelt scenes. On the one hand, yes this is all dumb, on the other, I was amused, none of this is particularly good, but with all the enjoyment I can't find a reason to complain.

If there's any one reason why this got the hate that it did, I'm willing to bet it's because of the moment in time it came out. Remember, Ben and Jennifer were a couple back when this was coming out, so it wouldn't surprise me if this was trashed even more than it deserved because of that. Add to that, Affleck wasn't especially well liked, remember all the bad actor jokes about him? This isn't to say it didn't deserve criticism, after all, the film is still not good, but that it gets as much hate as it does just feels undeserved. The performances are fine, it's really just stupid material, which is not their fault, in fact as far as problems go, their perhaps the smallest factor into it. A lot of critics have trashed the two, but honestly it all just feels like they lashed on them for their public personas, not for their performances, at least that's how it looks from my perspective; similar to the hate Leonardo DiCaprio and Titanic received back in the day, it just feels undeserved in hindsight.

Is Gigli bad? Yes, but it's a pretty average kind of bad. It may be batshit insane at times, filled with unintentionally hilarious moments, but it never goes into "worst movie of all time" bad, it's just not a good movie. Sorry guys, count me out of hitting this film with that level of hate.