THE HITCHHIKER'S GUIDE TO THE GALAXY-JANUARY OF SUCK 3 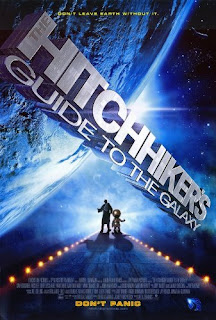 Not nearly as bad as I'd heard.

Kind of a last minute addition, I decided to watch The Hitchhiker's Guide To the Galaxy, which I've often heard was a bad adaptation, which it may be, but I enjoyed it, at least to an extent. While the film is clearly disjointed, the titular guide is often random interruptions, and lacking in deeper ideas, which I've heard is part of the source material; I did find myself enjoying the universe found within.

I want to make it clear, while I've  heard of this series, I've never read, seen, or heard anything from it, so my opinion here is coming from a newcomer. While my opinion could possibly change, I found this to be a pretty fun and unique film, the effects and designs are fun to look at, while the personalities found within are pretty fun. Even the humor feels pretty unique, the film opens with the reveal that dolphins have been warning us of Earth's demise, which I actually laughed pretty hard at, it's silly, smart and outside the norm from most modern Hollywood films.

On the other hand, without knowledge of the source material, I found myself confused by some choices, like the titular guide, which isn't a good thing. Cute though it may be, the animation sequences are always random, forced and more awkward than humorous, which is a shame because they ought to work I think. Also a drag on the film? The love triangle, that the film focuses more on that then the "Question" was definitely a mistake, the emotion there is missing, plus it feels a bit too standard for an otherwise weird film. Finally, one of the film's biggest mistakes is ditching Sam Rockwell's second head/personality in the film, once that's drop his character no longer stands out which is a shame, I had fun seeing him be this strange alien that only occasionally showed off his true form.

By the end though, yeah, this was a decent watch, it has several problems, but the effects and overall writing is enough to make this feel fresh. Maybe I'll change my opinion once I get around to the source material, but I can't imagine it'll change that much, good films can survive being poor adaptations after all. Oh well, let's see if the next adaptation works.