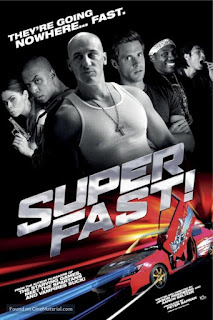 From the guys who brought you several mistakes.
Look, anyone who reviews movies, hell, anyone who enjoys movies, knows that the guys who made Meet The Spartans are awful at their job, so let's not dwell on this one. It feels like forever since we've had a good parody film, a big reason for that is that movies like this one have become the norm for the genre. Superfast! Is bad for the exact reasons you'd expect, the comedy is too juvenile, the gross out humor is lazy, the writing is lazy, it's stupid and weak humor, need I go on? It's a 90 minute vine that feels like it was made by that one youtuber who just realized Luke kissed his sister, then proceeds to milk his joke longer than it needs to be, all while using silly faces.

The honest truth though, is that it's a shame that this isn't a better parody, I expected it to suck sure, but the Fast and Furious franchise should be ripe for parody. Remember, this is a franchise that has only been getting praise since the second half of the franchise, the first half has it's fans sure, but it wasn't loved by people whose job is critiquing movies for a living. The odd fact of critics starting to love it by part 5, or the franchise's own shift in tone should warrant plenty of comedy, but this movie, much like the rest of the films by the two directors, is more concerned with making random, childish jabs that don't even cut the franchise down. Even when this film came out, the Fast and Furious franchise was already so bizarre that any parody could've made great jokes out of it, but as we've learned from these directors, they don't make your average parody, they make some of the worst.

If there's one thing I can say that is a step up from previous parody films from these guys, is that I did occasionally chuckle. As this film doesn't deviate from what it's parodying all that much, it has enough focus to make a decent observation (essential crew members include a rapper, an Asian guy and a model turned actress) that did catch me off guard; shame that the film does ruin the joke by dragging it out though. Still, the jokes never come enough to make this anything more than a mistake, even when the parodies of Mel Brooks weren't all that great, they never sunk to the boredom of this one.

Superfast! Is no Spaceballs, which might not be one of the best movies Mel Brooks made, but it's beloved because there are jokes that knock Star Wars down a peg, if it were just a bunch of fart jokes, or "I'm your father" gags it'd be like this film, forgotten in a bargain bin.