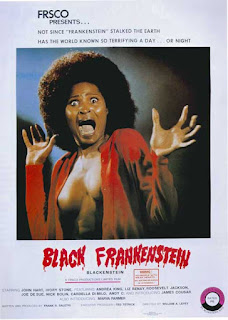 Yup, you read that right, Blackenstein, I wish it were worthy of such a silly title.
Unfamiliar with blaxploitation? Often deemed racist, yet in some ways empowering, the genre has become a bit of a cult interest these days, with people loving the style, the low budget production, the blood, sex, all that good stuff. Upon reading the name Blackenstein, I thought I'd be in for a campy good time, yeah, no, I can see why this is not well-remembered/liked.

The movie is about a wounded veteran, who gets treatment from a Dr.Stein (do you get it?), unfortunately a jealous assistant sabotages the treatment, resulting in the titular Blackenstein. I expected more sequences of torture and maiming, instead we get small doses of that, most of which hardly deliver the gore. I wouldn't complain as much if the dialogue in between were fun, but more often than not it's just boring. Long stretches of the film are just inept, uninteresting scenes, left in to pad out a film that feels restrained, not by it's budget, but by it's ambition. By the time we get to the film's odd ending where Blackenstein is finally defeated, I just didn't care and was glad this was over.

It's boring, what crime is worse than that? Is it racist? I honestly don't know, but it doesn't matter because Blackenstein is one of the biggest disappointments I've had on any January of Suck.