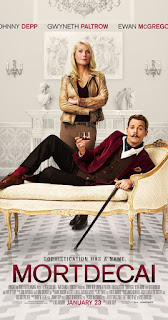 In which Johnny Depp solves the mystery of why he's awful.

In all honesty, I think Depp can be a great actor, just look at his work elsewhere, it's not hard, that being said, regarding Mortdecai, he's a total bore, an occasionally annoying total bore. Widely regarded as one of the actor's worst performances, as well as one of the worst movies of it's year (2015) this film isn't quite as bad as I expected, but it's still pretty bad. By the time I hit the hour mark I was just constantly checking my watch, wondering when it would end, the film is that annoying to sit through. At the center of everything wrong with this film, is Mortdecai, played by Depp, he's a comical genius/fool in the vain of classic heroes like Inspector Clouseau, but no amount of energy wasted makes this a funny character.

From where I stand, the issue with the comedy mostly stems from how inconsistent it all is. Sometimes the humor is based on witty banter, other times it's cartoony slapstick, then it's just odd, and finally it's all about the weird (though not really) mustache of Mortdecai. All these kinds of jokes could work together, but the problem is that the film never fully feels weird enough for the crazier stuff to work, while the more grounded humor never works because it can be too cartoony at times, add to all this a tone that never goes full adult, but is too childish for adults and it really is just a mess on all fronts.

That all being said, I wasn't all that annoyed by the film, it's a mess sure, but everyone commits to their roles so it isn't hard to get through, just annoying and boring. If there was one thing I did enjoy in the film, it's Mortdecai's sidekick Jock, who, despite having a stupid pun name, is kinda amusing as an intense bodyguard devoted to such a stupid man. Besides that just skip it, the film runs out of fuel by the time it hits the first hour.