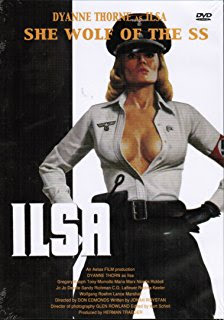 In all seriousness though, Ilsa:She Wolf of the SS is not a good movie, at all. It has it's fans sure, after all this has been parodied by the exploitation homage film, GrindHouse, but the gore and sex found within never caught my interest. That's not to say it's forgettable, what film featuring a nude woman standing on a table as she's technically being hanged is forgettable after all? The movie is at best cute (I'm using that very loosely), its edgy because it features buxom Nazi women, the title character is one, but the plot is a basic torture film with kinks thrown in.

The only reason you'd love this (assuming you're not some alt-right trash) is to see the kinky sex stuff and tits. Speaking of kinky sex stuff and tits, you know those things are easy to find right? Like that's the number one reason people go online, there's loads of sites that offers this stuff. Anyway, the movie is awful and I hope no one I know actually gets turned on by this.