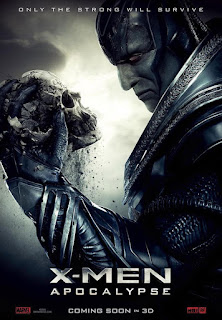 At this point there's really little reason to worry about this franchise getting worse, Disney's gonna reboot the whole universe, just watch. Despite the looming end of the franchise, the fact is that X-Men:Apocalypse is far and away one of the worst of these movies, yes up there with Origins, it's just bad.

It's a shame honestly, the world and concept of the X-Men is filled with potential, I may not be the biggest fan, but I've always wanted to see a great one of these. As of this point, the only really good one of these is First Class (Logan and Deadpool are great, but they're not about the X-Men), which coincidentally is the one with the least amount of Wolverine. Oh, you didn't know Wolverine was in this? Yep he's in a pointless cameo that lasts way too long because fan service. Rather than pointless fan service, I just wish we could see the potential become real.

Thinking about fan service, that perhaps kills the franchise more often than not. Hey, you liked young versions of beloved X-Men right? Well here's young Storm for some reason, she doesn't do a whole lot, but you have her. Wanna see a perfectly realized version of Psylocke? Well she does nothing, but Olivia Munn is really pretty so ok I guess. Want Apocalypse, one of the baddest villains in the comics? Well he's a boring Oscar Isaac, which is a sentence that's hard to believe, but it's true. I'm sure you get the point, it may not be new, but the fan service has plagued the franchise since the early days (I'd say since The Last Stand, maybe even earlier) which is coming back to bite the franchise in the ass soon.

Back to this movie, look, I just didn't care, I just don't, it's boring, I checked out at multiple points and more than any superhero movie in recent memory (minus a certain DC movie) I just felt tired. The action is among the most boring, multiple performances lacked any real spirt and yeah, the constant stream of pointless characters do nothing but annoy me. Just skip this, in a few years it'll be one of many films that no longer matter once Disney erases it from canon.