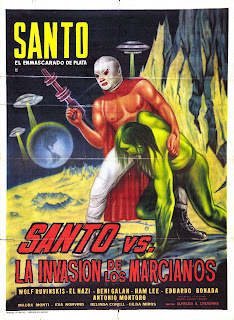 For those new to my stuff, January is when I dedicate a whole month to watching 31 bad movies (bad to the public eye) I've yet to see. Why do I do this? Because... because. In any case, we kick off January of Suck 3 with El Santo Contra La Invasión de Los Marcianos, what a mouthful.

So as you can probably tell this is a Spanish language movie, starring Mexican wrestler/superhero El Santo. Personally, I grew up watching this guy. Yes his movies are dumb, but look, I saw them as a young kid, plus these movies weren't made to be especially deep. The gist of them, is that Santo is essentially the only man who can stand up to various supernatural beings, basically, imagine if The Rock decided to play as himself for all his action films, it'd be weird but charming.

This is among the few films I've never seen, wherein El Santo must fight Martians, because... they never seem to decide to vaporize him like they do with crowds of people (don't ask me why, I never found that out). Now my Spanish is admittedly not perfect, as I was born in the U.S. so it's pretty basic, but from what I gathered the Martians viewed Earth as a threat because of Nuclear weapons. The Martians have disintegration helmets, or eyes I guess, but it's the nukes that has them frightened, seriously, I mean I understand why, but they could easily stop such weapons no? They also teleport around so you know, they've got options in case one was launched to Mars, but hey, invading Mexico is priority here. Oh, you're wondering why they invade Mexico? Because apparently it's the only nation against Nukes, so you'd think maybe the Martians might want to spread peace, maybe, just maybe use the nation as a positive example for the galaxy, but no they start killing people because, humans are too dangerous to live. Keep in mind this is all just to stop violence, which the Martians apparently dislike.

So from that you probably think I hate this one, in truth I kinda enjoyed it, I'm being honest. Look I grew up with this stuff, plus, I might get into it more in a later day, but I like that movies aimed at kids, or just campy Sci-Fi stuff can be STUPID beyond belief, yet somehow still have a thoughtful idea as the core of the story. Yes, this is a dumb movie showing off a wrestler, showing off sexy women and men, but it's also one that knows nuclear weaponry is wrong, it presents ideas that have merit. We can laugh at the stupid plot, we can laugh at the cheap effects, we can laugh that the Martians look very human despite them acting like humans are hideous to look at, we can laugh at everything, but you'd be wrong to say that the movie lacks ideas worth exploring.

On the other hand, this movie is a bit of a chore to sit through. It's fun to see some good ol' lucha liber yes, but at a certain point it becomes too much. As said earlier this is a stupid movie, a fun one, but stupid nonetheless, so at times it will be too much for plenty of people, myself included. I'm sure kids will dig it a lot more, as I once did, but seeing it now, despite having its charm, I did find myself looking at the time, wondering how much longer I had to sit through. Lovingly made, but about as bright as a five year old, I definitely get it if this is a hard sit through for adults unaware of the character.

Before I end this one, I'd just like to ask one thing though, what the hell was up with that scene where the Martians "disguise" themselves as humans? All they did was dress up in Greek attire, named themselves after various figures in human myths, and then ditched those clothes literally a scene after... um neat idea?

Well I'd say this is a good start for the year, it's not awful, but I know that's coming soon. Hope you enjoy these!