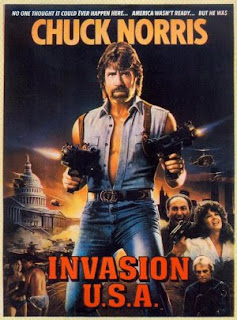 Chuck Norris may have a fist in his beard, but he still has a shitty movie career.
So far I haven't been all that mad with this year's January of Suck, granted, this is only the third movie in, which is by far one of the most boring I've seen for one of these. Invasion U.S.A. Is exactly what you'd expect from a Chuck Norris action film, stupid, riddled with cliches, boring and possibly racist.

Let's not waste too much time here okay? I barely remember the damn thing and honestly the film's worst offense is being boring as all shit. Chuck is not a great lead, never has been, that he has remained relevant due to a cute meme (I got a few laughs early on I'll admit) is possible because his films (from what I've seen) are self serving. Chuck portrays himself (with the help of his brother) as a badass, which is likely why people turned that into a joke. This movie isn't the worst example of Chuck's ego, which is why it's probably not a "so bad it's good" movie, but lacking that it becomes just another boring action film.

The only nice things I can say about this really come down to a few minor things, think of them as the opposite of nitpicks, ones that are more positive in nature. The opening, despite feeling a bit racist  (not intentionally, but I don't know it felt off) is pretty effective as a shocking intro for the villains. Despite Norris being boring overall, I did find some scenes with him to be pretty fun, specifically one where he blows up some of the bad guys who are terrorists, or drug dealers, I didn't really care. Finally, what may sound like the most boring positive, I liked some of the sound mixing in the film, simple stuff like the audio on the footsteps, tools, weapons, etc. have a neat sound to them that are very cheap, yet somehow soothing to hear; granted maybe this was just that boring that even sound effects were more appealing than the film itself.

Bottom line, this is an awfully boring film. Chuck Norris was NEVER a compelling action hero and this is just more proof of that. I didn't describe the plot because you could honestly figure it out if I tell you to think low budget, action films of the 80's. It's not something I can stay mad about, but it is just incredibly boring for what it is, a trash action film, starring an actor who works best as a cheap joke high schoolers might say when they think they're clever.