THE PRINCESS DIARIES 2-JANUARY OF SUCK 3 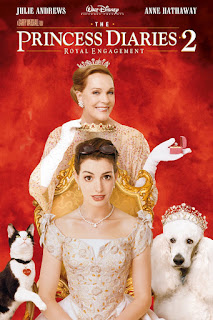 Remember when Disney wasn't buying companies?
It feels like forever ago, but Disney used to make embarrassingly bad family films, consistently. Sure, the past year had a mediocre Beauty & The Beast, but it at least felt like effort was put into it, like it wanted to be epic, a decade ago, that just wouldn't be the case. While the company has always thrived on animation, the live-action fare (though occasionally delightful/amazing) has more often than not been a shallow, embarrassing pool of bad movies, at least that's what it felt like growing up in the mid-90's and 2000's. One of the movies I remember among those shallow films was The Princess Diaries, a movie about a nerd who becomes a princess, there's no depth, just boring wish-fulfillment, today I talk about it's sequel, a much more stupid film, with a lazy excuse for tension that gets resolved by characters pointing out the obvious sexist flaws in the issue. It's not the worst, but it's exactly the kind of film that would be used as a punchline to mock the Mouse and his studio.

Before we go any deeper, let's talk about why these movies rarely happen anymore, the answer, much as it may shock you, is not that this was awful, which it was. The truth is, Disney currently has cracked the code to entertaining everyone, I can't put the entirety here as I haven't figured out exactly how they've done it, but I'll try to explain. Once upon a time, Pixar was the only studio producing quality films for the Mouse, when Disney realized it was losing them, they did the only sensible thing, buy the studio and plant it's chief as the head of their own animation films, brilliant, now the animated films are on the same level, what next? Well the Mouse needed men, but more importantly boys to worship the studio, after all, the house that owed it's riches to princesses needed them to grow. The solution? Buy an up and coming film studio with positive press and financial woes, hello Marvel. That wasn't enough though, a few years later, as the Marvel buy out was proving to be a success, Disney took it's next major step to bringing more money than anyone believed possible, buying Star Wars (okay Lucasfilm, but mainly the first thing) and redeeming the franchise by allowing the creative team to have the freedom and strategy Marvel had used in it's own features, micromanagement sure, but it allowed for quality to be at least average. Finally, the latest piece of the puzzle has joined, Fox, what plans does the Mouse have for them? I cannot say, maybe they want to complete Marvel, maybe they want the most beloved TV family, or it's all for their new streaming service due in about a year or two. Either way when you control so many beloved franchises, why bother making silly family features just to please sensitive parents? Just waste all your money, occasionally make risky choices with your franchises, remake your greatest hits, and rarely make small films to fill a quota or something.

One day we'll all be ruled by the Mouse, buying our Apple iDisney Jr. Pads for our kids, eating Disney approved healthy meals, while we wait for Mario Party in Disneyland to finish downloading. We'll all have to march to work in our local Disney Superstore, as we await the news from the head of our nation, the CEO of Disney, notifying us of the latest Disney approved practices to be shared in the family household. There's nothing you can do, but when that happens and you are on trial for admitting Toy Story 23 is decent, remember this, Disney made The Princess Diaries 2, an awful film of the past that proves even Disney wasn't always invincible, maybe they still aren't.

(Yes this is a joke, I honestly had so little to say about this, besides that it's awful, overlong and almost like a fake film that somehow got finished and released. Chill, I love Disney.)