THE BOOK OF HENRY-JANUARY OF SUCK 3 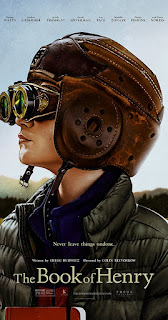 Yes, I'm reviewing this again, because I can.

If you may recall, last year I reviewed The Book of Henry, so why then, did I decide to do that again this year? It is honestly that bizarre, sure it isn't The Room, Birdemic, or Plan 9 From Outer Space, but it is so strange to see a competently made film with performances, lines and scenes that would feel right at home with those movies.

Since I have reviewed this before, I'm not gonna go as long as I would've if this had been my first viewing, but I am gonna talk spoilers, so if you haven't seen this, I recommend you do, it's hilariously bad.

So, a few things I forgot to bring up in my original viewing, Sarah Silverman is an incredibly odd character in this movie, she's a friend to Henry's mom and her scenes feel crazier then I remember them being. Sarah's first interaction with Henry suggests they have a love/hate relationship, which is cute, but after Henry gets cancer (while still being the biggest asshole around), he admits they mock each other to hide how they really feel. I already hear you asking, how, in fact is that crazy? Well what if I told you that Sarah's response is a kiss on the lips, nothing too deep, but I don't know it feels a tad creepy, by the way, the film doesn't make it creepier but a few minutes thinking about it made it reeeeeeeallly creepy for me. Earlier in the film we learn that Sarah is an alcoholic with mommy issues, tough stuff, but the film barely addresses it, which makes the scene it's introduced in awkward and a bit funny, because what the fuck movie?! Why does this matter to her kiss with Henry? Well remember, Henry is a smart asshole, not a compliment, just an observation. At this point in time, Henry is just a kid, but what would've happened if he were older? Sarah, in this film, clearly isn't exactly a well-functioning human, despite being more mature then Henry's mom (a second viewing confirms she is a horrible mother) Sarah is still pretty fucked. Knowing that Henry is already a manipulative little shit, knowing that he finds Sarah attractive despite the insults, knowing that one day he could've been just another horny dipshit, but smarter, lead me to a rather disturbing conclusion, if Henry lived long enough, there's a good chance he probably would've hooked up with Sarah's character for a one night stand (at least). Remember this is a movie about a kid trying (and almost succeeding) to convince his mother to kill someone, while providing ways to cover it up, as well as ways to adopt his neighbor's daughter without actual consent. This asshole would likely not be above trying to bang his mother's friend, writing that sickens me yes, but that the movie leads me to think on those terms is more the movie's fault than mines I think, I mean I didn't even have to try to  reach that, the details already in place point to that being a pretty logical, (fucked up) place to go. Don't believe me? Watch the movie, think about how so many sexually abusive men are manipulative and carry some power (Henry knows how to make bank in this), think about how Sarah is presented as an alcoholic, who secretly likes Henry (she even admits she doesn't know anyone more mature) and she's had a pretty bad past with her mother, if Henry were older, a subplot would definitely involve him being a creep, the movie provides so little against this it's scary.

Other minor things I picked up this time don't measure to that, admittedly bonkers theory, but I will fully admit some charm in it's so bad(weird) it's good quality is lost without the initial surprise. I still enjoyed it, but the laughs weren't there as much, though some scenes are even funnier, outside the above tirade, I also laughed a lot more at the idea of Henry's principal talking to Henry as if he's some asshole (he is) as well as if he's some kind of loose-canon employee of hers, despite just being a student voicing obvious concerns. I can't guarantee I'll review this again next year, but I do feel like I should make this a staple for January of Suck, after all more viewings will surely provide more fun, more understanding of the lunacy, as well as make me crazier.

So stay tuned for next year's January of Suck, where I'll find even more things to laugh/be confused/ theorize about. Who knows, maybe next year I'll touch upon how Lee Pace is a stalker out for revenge after Henry pretty much shat on his skills as a doctor.